The new Type 26 ‘Global Combat Ship’ designed and built by BAE Systems is the new class selected for the replacement of eight anti-submarine frigates of the Duke class currently in service with the Royal Navy. Unlike previous designs that were exclusive to the Royal Navy, the designer is offering the vessel to international partners and local build and support. One of the prospects in Australia, where the Global Combat Ship is proposed for the future frigate, under Project SEA5000 phase I.

The ships with a displacement of 6,900 tons will be equipped with a vertical launch missile silo, part of the Sea Ceptor air and missile defense system, and 5-inch main gun – both of which offer improved capabilities and the potential for further development throughout the ships life. The ship’s flexible mission bay provides space, power and cooling for additional mission systems and work space. The ship is powered by a single gas turbine that develops a maximum speed of 26 knots. Two electric motors fed by and four high-speed diesel generators that deliver electricity for the ship’s system are used for continuous operation, extending the ship’s range in excess of 7,000 nautical miles.

The bay will be able to house and deploy additional boats, unmanned vehicles (aerial, surface or underwater), or store standard ISO containers, allowing the ship to adapt to changing missions, ranging from disaster relief and humanitarian aid operations to embarking military forces or supporting diving operations. It’s large flight deck is able to accommodate helicopters up to the size of the RAF’s Chinooks. 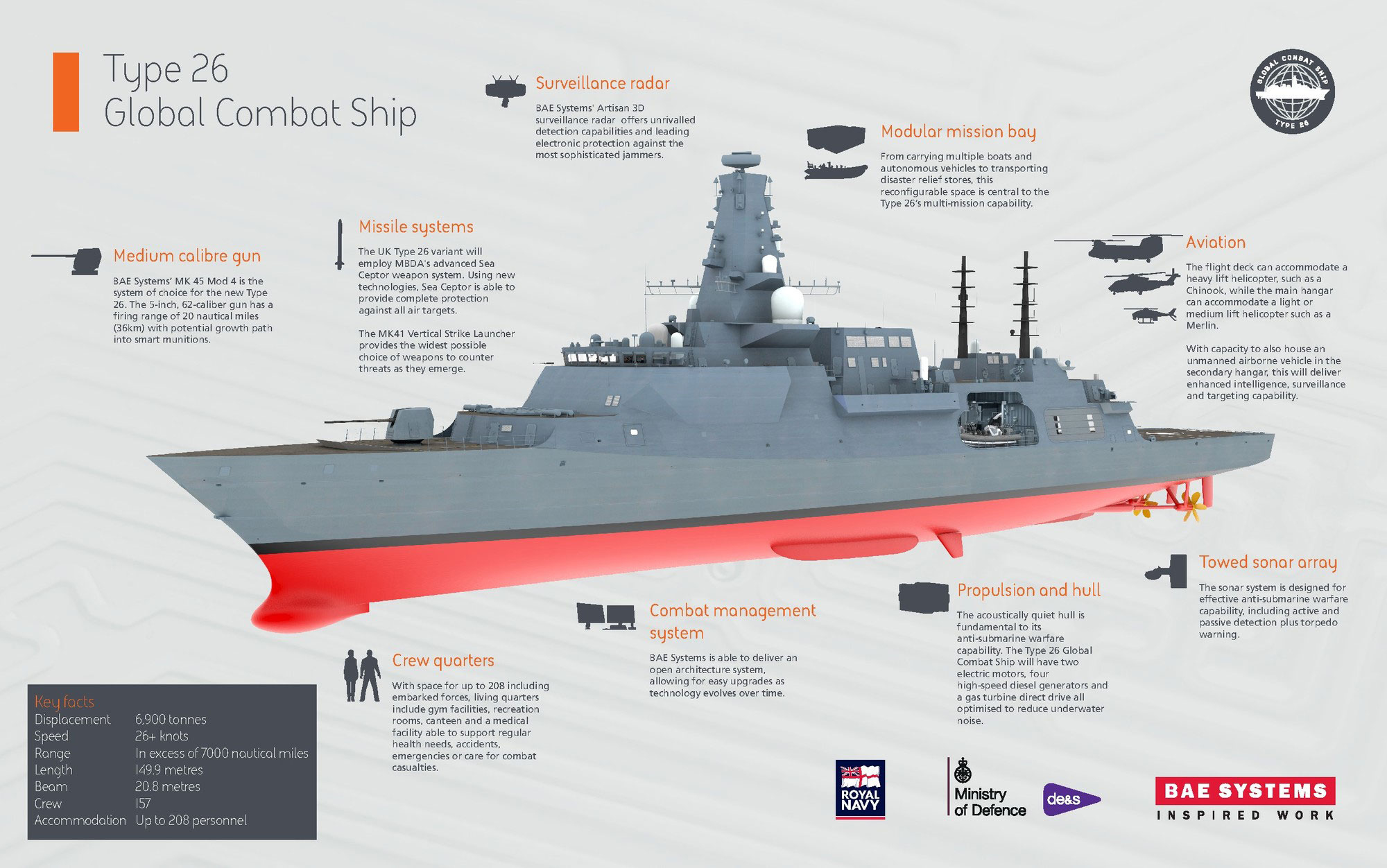 The ship uses the combat management System (CMS), a derivative of the common CMS already supporting the Type 45 destroyers. Development of the weapon systems is underway. The vessel will integrate a Thales Artisan Type 997 3D medium range surveillance radar, Sonar 2087, Sea Ceptor anti-air missile system and new 5″ gun system. MBDA is at work under a £400 million contract to integrate the Sea Ceptor air defense system on Type 26 and -23 frigates, as well as the land based variant. Sea Ceptor uses the Common Anti-air Modular Missile (CAMM) to provide a common interceptor for the Royal Navy ships and ground-based air defense (GBAD) for the land force.

As part of the Sea Ceptor weapon system, CAMM will defend against all air threats, including aircraft and anti-ship cruise missiles, and other highly sophisticated threats. The new system will replace the Sea Wolf and Artisan 997 radar on the remaining Type 23 frigates, three of the vessels are currently being refitted with the system, to allow sea trials this year. The first Type 26 frigate will receive the new missile as they are inducted into service in the mid-2020s.

The new frigate will also get a larger gun, the 5-inch, 62-caliber Mk 45 Mod 4 Naval Gun System. As part of the vessels’ Maritime Indirect Fires System (MIFS), the system includes the autonomous gun turret, an automated ammunition handling system and gun fire control. BAE Systems will deliver the three guns for the first three frigates in 2020.