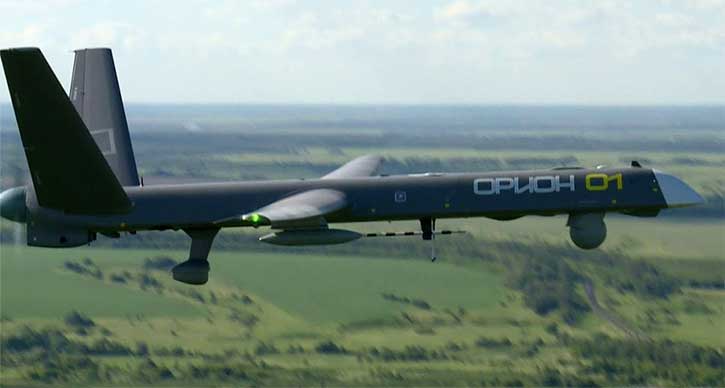 The Russian drone manufacturer is aggressively marketing the Orion E, a Medium-Altitude Long-Endurance (MALE) unmanned aerial system (UAS). The current export-oriented variant was launched in 2017. Seeking new customers at the LAAD 2019 exhibition in Brazil and LIMA 2019 in Malaysia, the developer, Kronshtadt Group is making the first steps entering a busy and competitive drone market.

Unlike comparable Chinese and US drones, Orion E is not positioned as a strike-recce platform as it is not offered in weaponized configuration and is currently limited to the surveillance and reconnaissance role. However, Orion-E offers a 24-hour mission endurance with its basic configuration, a score other competitors have worked hard to achieve. A complete Orion unmanned aerial system comprises four to six UAVs, a ground control station, automated take-off and landing systems, and communications elements.

At a maximum takeoff weight of one ton, it carries a payload weight of 60 kg, on 24-hour missions and a cruising speed of 200 km/h. On shorter missions, Orion-E can carry up to 200 kg of payloads. Typical sensors carried on the drone include ground mapping and DF, maritime surveillance and electro-optical imagery surveillance capabilities. At its operational ceiling of 25,000 ft, Orion E is remotely controlled, from a distance of 250 km, via line of sight datalink. This range can be extended to 300 km, using a radio repeater on another drone.

Roughly equivalent to early generation MALEs such as the Chinese Wing Loong, Israeli Heron I and American Predator, Orion E is offered in an unarmed configuration, similar to the Predator XP and Heron I. Unlike the US and Israelis, Chinese and Turkish drone manufacturers offer weaponized platforms and have sold such systems to customers in the Middle East, Africa and central Asia. Chinese sources have claimed over a hundred Wing Loong series drones have been delivered for export. These drones have dropped more than 3,000 weapons, many of them in combat missions, scoring an average hit rate of 90 percent. Kronshtadt has also evaluated the use of small diameter weapons on its drone. Both 50 and 100 kg guided missiles are being evaluated, with a loadout of four and two weapons per drone.

Addressing the demand for more mission endurance, speed and payload drone manufacturers are fielding heavier, more capable drones to assume more missions. Israeli, US, and Chinese drone manufacturers are now offering the Heron TP, Hermes 900, Predator B, CH-5, and Wing Loong II platforms, all equipped to carry long missions at extended ranges. By 2021 Kronshtadt is expected to join this group with a more advanced version – Orion-2 that will have a maximum takeoff weight of five tons, and be able to carry heavier payloads, fly faster (350 km/h) and at higher altitude (38,000 ft). The new drone is expected to carry a satellite communications data link, extending its operational range to thousands of kilometers.