In September 2016, the United States and Israel signed a Security Assistance Memorandum of Understanding (MoU), in which the U.S. agreed to allocate $38 billion in foreign military financing (FMF) to Israel throughout the decade from 2019-2028, reflecting an increase from 30.0 billion in the previous decade.

Unlike the past agreement, the FMF gradually reduces allowance for the procurement of equipment and products from Israel. Until 2019, Israel could convert about 26% of FMF into Israeli shekels (ILS) and spend it domestically. The new agreement reduces the share of aid that Israel is allowed to convert. The total of $815 million Israel could convert to local currency in 2019 will be cut by half to $450 million in 2025 and finally to zero in 2028.

In addition to the above conversion restriction, the agreement prohibits the practice of using FMF dollars to purchase fuel from the U.S. (mainly jet fuel) from as early as 2019. Going forward, this amount of $300-400 million per year (depending on fuel prices) will have to be funded from the domestic budget of the Israeli Ministry of Defense (IMoD) in local currency. 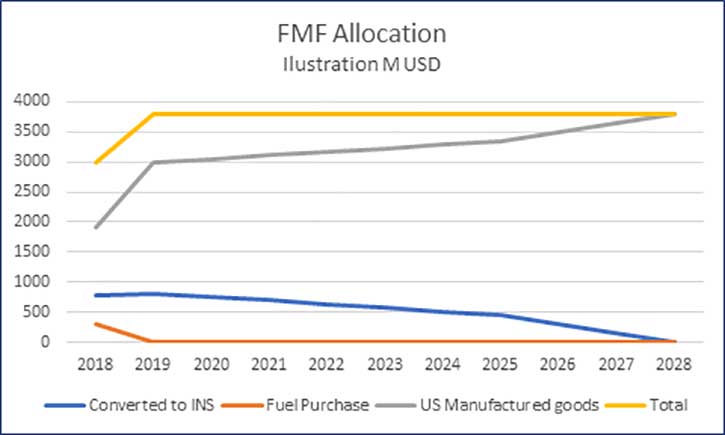 Until now, these missing funds were the main source of financing for local defense industries, and their elimination causes significant concern for Israel’s defense companies. In domestic currency, such a vast amount of missing funds poses a significant challenge to the IMoD’s ability to maintain the current level of defense R&D invested with local industries and the academic establishment.

According to the April 2020 IMF report, U.S. GDP is expected to shrink by 5.9 percent in 2020 due to the COVID pandemic. Meanwhile, the Eurozone economy will dive by 7.55 percent, while the scope of global trade is expected to decline by 11 percent.

There are reasons to believe that the DOD procurement of weapon systems continues, thus helping the administration cope with the economic crisis caused by the pandemic. The U.S. could probably refrain from cuts in the FMF, especially now when a more significant portion of it is spent in the U.S. creating jobs that help stimulate the economy.

However, the situation in Israel is different. More than 70% of the revenues of Israeli defense industries come from exports. Most analysts expect that during the long and challenging path to economic recovery, the new Israeli government would be forced to shift budgets from defense to fund social and healthcare services. Government stimulus would be channeled toward Hitech, mainly in the sectors in which Israel has a relative advantage: I.T., biotech, automotive, and medical devices. Concurrently, while IMoD balances its procurement by optimizing the utilization of FMF to fill the gaps.

The slowdown of the U.S. economy would most certainly drive the administration to push back on a possible Israeli request to ease the requirement to send aid dollars in the United States. It would likely insist on the timely implementation of the shift or even demand to speed up the schedule and have all FMF spent in the U.S. to create new jobs and support the beleaguered local aerospace and defense industries.

Suffering in silence is not the only way for Israeli firms to respond to these dramatic changes. Hiding in this dire situation is a positive prospect that presents a new opportunity for the struggling defense industry.

Every year now, the IMoD will have access to more and more funds that can be spent only in the U.S., climbing gradually from $2.2 billion in 2018 to $3.8 in 2028, a surge of more than 72%. This translates into an additional $1.2 billion of available budget per annum to purchase goods from U.S. companies.

The FMF guidelines allow the IMoD to procure weaponry not only from U.S. defense contractors but from Israeli-owned companies located in the U.S. as well. Therefore, Israeli suppliers of IMoD who can swiftly transfer production to the U.S. will be able to compete for increasing volumes of IMoD contracts there. The IMoD is expected to encourage this trend, considering its desperate need to free chunks of ILS budgets to preserve unique R&D personnel and capabilities in Israel.

Accordingly, a smart Israeli defense company would transfer its technology (ToT) to a U.S. company. The IMOD would then contract with the U.S. entity using FMF. Then, with the profits from their U.S. operation, they would be able to fund the required R&D in Israel, support the IMoD’s unique requirements, and continue their growth in both countries.

Several Israeli defense industries are ahead of the curve on this matter. They have transferred their know-how and manufacturing to the U.S., positioning themselves to take advantage of the growth in the total FMF by pursuing several different models, as follows:

Despite the hype about a flat world and global village, American and Israeli companies and entrepreneurs have significantly different business cultures, work at entirely different paces, and operate in vastly different business mentalities. This cross-cultural gap is exacerbated in the defense industry’s case by the strict security restrictions of both governments concerning all defense R&D and production.

Consequently, creating a U.S. entity or merely transferring know-how to an existing U.S. company are challenging projects for an Israeli company, requiring multiple and complicated procedures that may easily take 3-4 years before the entity turns profits. ToT is not a walk in the park.

The major industry players from Israel need only enhance their existing U.S. production capabilities and streamline their activities to address the impending IMoD’s ILS shortage. In contrast, for smaller companies with no U.S. presence, production overseas is a challenging, expensive, and time-consuming task, which requires expertise, breathing space, and personnel they do not possess.

Accordingly, mid-sized and smaller Israeli companies seeking to offer their solution to the IMoD in return for FMF dollars need to urgently seek ways to reduce the time it takes to bite into this growing pie. Their need represents an opportunity for those that possess expertise in this niche, such as ENA, which over the last decade has gone through the process of developing procedures that comply with the demands of both governments, and has recently obtained a facility clearance. Moreover, any U.S. partner with experience in ToT for FMF projects can streamline the process for Israeli companies and conduct relationships with the DoD and the IMoD’s N.Y. delegation on their behalf, which is necessary to utilize FMF budgets.

Once the Israeli company decides to work with a U.S.-based partner, the ToT will require frequent visits of representatives of the U.S. facility in Israel and vice versa. Experience proves that these frequent interactions may create undesirable tension due to business culture gaps, slowing down, or even jeopardizing the entire effort. A wise way to mitigate this risk would be to outsource the inter-facility relationship. The challenge to this is the fact that there are very few professionals with the cultural expertise to work seamlessly in both worlds.

Switching back and forth between the Israeli and American corporations requires simultaneously speaking the appropriate professional jargon on either side of the ToT, and conducting their affairs according to suitable business codes and cultural nuances. Retaining such experts can significantly increase the probability of conducting a smooth and swift ToT and reaching actual sales sooner.

The reform in FMF utilization, combined with the expected cut in Israel’s defense budget due to the pandemic, forces Israeli defense industries to transfer their production to the U.S. This is a major undertaking for smaller companies that requires expertise, time and personnel many of them lack. The yellow brick road for these players – not only to survive but to thrive in this new era – is to take advantage of existing infrastructure and expertise that would enable them to seize this lucrative opportunity and turn it into profit.

Joel Alon has more than 30 years of experience in business development, planning, marketing, and operations, in the U.S. and in Israel. As a Senior V.P. Marketing at IAI Alon also led the establishment of IAI’s U.S. subsidiary Elta North America, acting as a shadow CEO for four years.