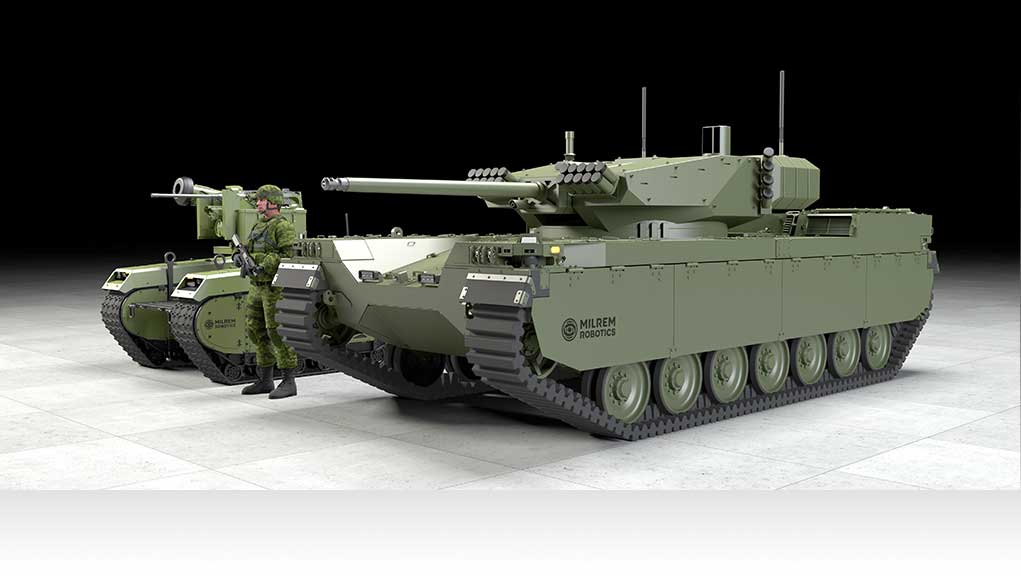 The Milrem Robotics company from Estonia has developed a Robotic Combat Vehicle (RCV) known as Type-X, introducing new and exciting manned-unmanned capabilities to modern combat. “Milrem planned to unveil the mockup of Type-X at the Eurosatory 2020 event,” Kuldar Väärsi, Milrem CEO told Defense Update, “We plans to complete the prototype of the vehicle by the end of the 3rd quarter of 2020 and begin mobility testing in October.” Väärsi expects its new robotic combat vehicle to weigh about 25 percent and cost about 50-33 percent of an equivalently armed, conventional combat vehicle. The development is funded by an unnamed customer.

Type-X is a modular chassis that accommodates various configurations; the first variant will be used to assess the performance of the chassis. Such a turret weighs about two tons, along with ammunition and protection, leaving up to an extra ton for more mission payloads. The prototype will carry a generic turret, mounting a 30 mm cannon, and is upgradable to 50mm. Production vehicles provide standard mechanical and electronic interfaces to accommodate different turrets and mission payloads from different manufacturers.

Using a hybrid (diesel-electric) propulsion system, the RCV maintains mission autonomy for up to 600 km, at a maximum speed of 80 km/h on the road or 50 km/h off-road. Maximum range denotes using fully charged batteries and full tank of JP8. The vehicle uses rubber tracks delivering superior mobility even on rough surfaces.

A length of 6-meters and 12-ton weight ensure the Type-X stability for fire precision with an automatic 30 or 50mm cannon. Other advantages derived from the small size are the height of 2.2 meters, providing a low silhouette, and ample clearance for internal air transport in C-130 aircraft (2.9-meter width).

Mission agility increases with more mobility options, including air mobility by aircraft, parachute, or helicopter sling loading. The current vehicle can cross water but do not have amphibious (swim) capability. Milrem considers providing such capability in the future.

At a gross vehicle weight of 12 tons, other air-delivery options are available, including airdrop by parachute, low altitude parachute extraction (LAPES) as well as sling-loading under heavy transport helicopters such as Chinook and Super Stallion (CH-47D/F and CH-53G/K). Such capabilities are currently unattained by other combat vehicles of this type.

The drive train uses a hybrid-electric power system, comprising battery banks in front and a diesel generator in the rear. Running continuously at optimal power load when charging, the diesel dissipates lower heat signature, with minimal frontal exposure. Stored energy is used for silent operation, and batteries are recharged while the diesel engine is running. The vehicle maintains significant storage of electrical energy, driving electric motor propulsion and mission systems over a central software-controlled power bus that can distribute several hundreds of kilowatts of high-voltage DC power.

This is an excerpt from the article. Subscribe to Read full version

According to Chief Engineer Svärdby, all sensors interface with a high-performance computing system using powerful algorithms to produce the tertian map and movement decisions for the vehicle. Actual movement decisions consider these terrain and situational maps, controller’s and mission commands to control the vehicle’s Drive by Wire system.

According to Väärsi, the Type-X RCV design features modularity and agility to enable future configuration supporting a ‘family of RCVs’, to carry out different missions in support of manned and unmanned combat operations.

Type-X is designed to enable fully autonomous performance, moving on road, in-formation or off-road, conducting overwatch and intelligence, surveillance and reconnaissance (ISR) missions, and target acquisition. Specific countermeasures could also be employed automatically, under certain operational concepts. However, Type-X is not designed to employ its weapons autonomously – but wait for an order from a human operator to engage targets with lethal effects.

Embedding RCV in tactical formations increases the combatant reaction time and reduce the cognitive load of the commander, contributing to a more effective battle command. Using Artificial Intelligence (AI) and Machine Learning (ML) are employed to assist robots and operators in target detection and acquisition and can also help establish and update the tactical situational picture and help commanders make decisions.

This is an excerpt from the article. Subscribe to Read full version

Mission support of rapid deployment – for their compact size and weight, Type-X could be deployed as load carriers, mission support vehicles, electrical power generation units, and weapon carriers for base protection and patrols. On such logistical support missions, a turretless Type-X chassis will be able to haul 5-6 tons, – 2.5 – 3 tons onboard the vehicle itself and up to additional 3 tons loaded on a trailer. These capabilities could become quite useful for peacekeeping operations.