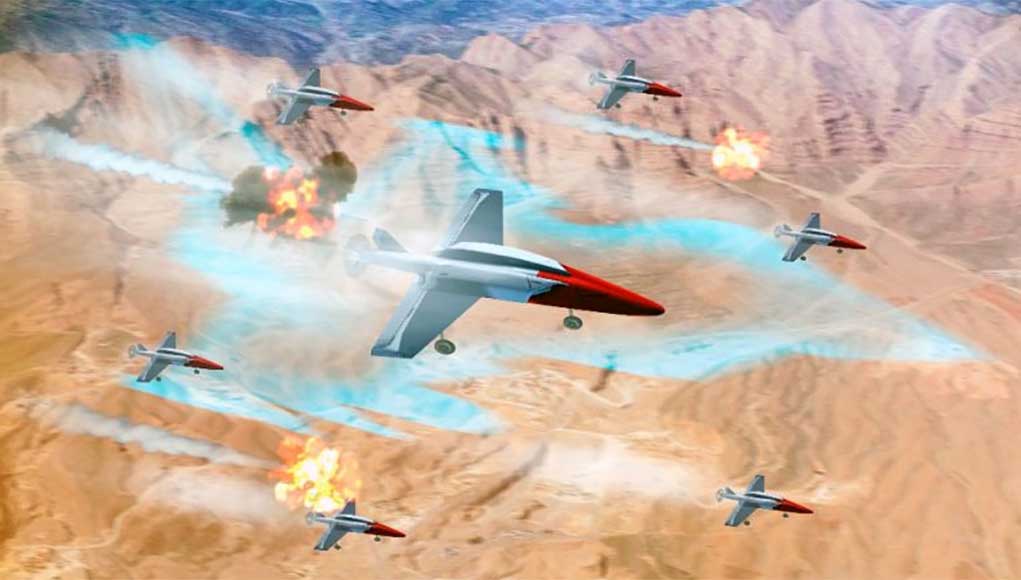 During the demo, a swarm made by several remotely-piloted aircraft equipped with Leonardo’s BriteCloud electronic warfare active decoy technology was used to confuse and overwhelm trial radars simulating enemy air defense systems. The demonstration was held as part of an RAF Rapid Capability Office (RCO) program evaluating combat swarm techniques, using multiple small unmanned aerial systems. Inspired by swarms of insects, the concept for swarming drones has already been recognized by the UK Ministry of Defence as a potentially game-changing future technology. The information gained from the demonstration will inform potential future UK programs to acquire an autonomous swarming drone capability.

The demonstration showed how a swarm of BriteCloud-equipped drones overwhelmed the threat radar systems with electronic noise. The trial followed a rapid cycle of development that saw the RCO and Leonardo’s engineers working closely with UK SMEs Callen Lenz and Blue Bear that provided the drones and mission management systems.

BriteCloud is a smart jammer designed in a small form factor packed in a small tin-can size container. BriteCloud creates a false target so convincing that technologies designed to spot decoys are rendered ineffective, allowing a much wider range of threat systems to be defeated. Using advanced DRFM-based technology that provides both Doppler and range obscuration, BriteCloud defeats chaff discrimination techniques and systems with range and velocity ‘gates’.

Initially deployed as an off-board expendable active decoy (EAD), BriteCloud is operational with the RAF since 2018. The EAD protects combat jets against enemy radar-guided missiles. Each round can mimic the aircraft’s radar signature from it is launched, causing threat radar systems to track the decoy rather than the aircraft itself.

UK drone specialist Blue Bear reports completion of the second phase of the 18-month 5GRIT project, culminating in drone flights on an arable farm in Yorkshire and a livestock farm in Cumbria, controlled over 5G from hundreds of miles away in London and Bedford. 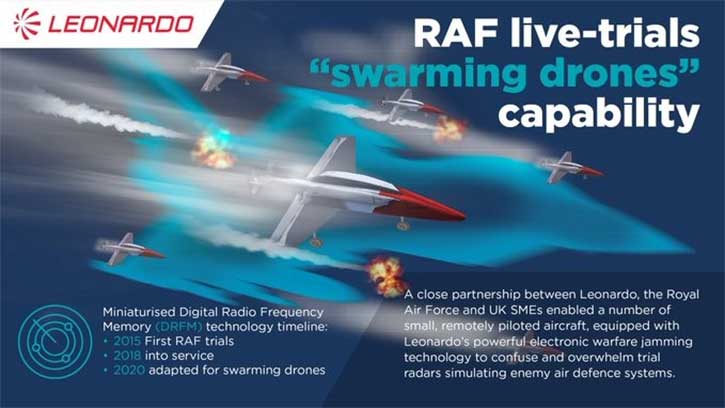 Swarm technology is progressing rapidly in the UK. In 2019 the UK Defence and Security Accelerator (DASA) awarded £2.5m to a consortium led by Blue Bear Systems Research Ltd to develop drone swarm technology. The goal was to deploy advanced autonomy, through machine learning and AI to reduce the number of operators required, the time it takes to train them, and the cognitive burden on any operator during active operations. BlueBear first demonstrated this capability in April 2020.

The ability to deploy a group of low-cost autonomous systems, self-controlled or managed by a single operator, delivers a new paradigm for battlefield operations. This allows very complex swarm-based missions to be performed simultaneously against single or multiple targets in a time-sensitive and highly effective manner.

The UK MOD is accelerating the development of swarms of network-enabled drones under the £160m Transformation Fund announced in 2019. These systems will be capable of confusing and overwhelming enemy air defenses. Spearheading formations of F35 and Typhoon combat aircraft, these drone swarms will be able to penetrate denied airspace, using deception and suppression of key air defenses assets inside Anti-Access Area-Denied (A2AD) airspace. In April 2020 the 216 Squadron was reformed at RAF Waddington, to lead operational experimenting and deployment of network-enabled drones. Such missions are now part of the Future Combat Air System Technology Initiative (FCAS TI), delivering the Tempest 6 Gen combat aircraft in the 2030s.