On 6 October, the Russian Ministry of Defence successfully tested the Tsirkon hypersonic missile. The tests were carried out from the waters of the White Sea, from the “Admiral Gorshkov” frigate. The test is the latest in a series of qualification tests (state tests) of the hypersonic anti-ship missile developed for the Russian Navy and the first performed from a combat vessel at sea.

The news was announced on 7 October 2020, by the Chief of the General Staff of the Armed Forces Valery Gerasimov during a meeting with President Vladimir Putin. All pre-launch and flight stages were fulfilled and the test culminated with an accurate hit on target. General Gerasimov told Mr. Putin. Vladimir Putin praised the successful test as an extraordinary event for Russia and its armed forces, getting the newest weapon systems, unparalleled globally, ensuring its defense capabilities for the long term.

According to the data given by Gerasimov, during the tests, the missile’s flight range was 450 km, the missile ascended to a maximum altitude of 28 kilometers (91,000 ft), and continued the flight to a total time of 4.5 minutes, achieving a maximum hypersonic speed of more than Mach 8.

The missile is expected to undergo more test flights from surface ships and submarines. The project 885M submarine Kazan has been preparing for the first launch of a Tsirkon in 2020. Following the completion of the tests, Tsirkon will be cleared to equip some of the designated platforms. These vessels include ten Project 22350 ships, the second in this class was commissioned in July 2020, with eight more to be commissioned yearly until 2027.

These vessels are designed to carry 24 launchers, compared to 16 carried on the Gorshkov and the three follow-on frigates of the class. Future Project 22350M frigates will be able to carry 48 missile launchers. Other platforms likely to receive Tsirkon are the nuclear-powered battlecruisers Admiral Nakhimov and Pyotr Veliky, each carrying 80 launchers, and the Yasen class attack submarine Severodvinsk. Coastal defense configurations are also planned, similar to Yakhont land-based variant Bastion.

3M22 Tsirkon achieves hypersonic speed by using a SCRAMJET engine. This type of engine uses the shockwave to compress the fuel and air, instead of the ramjet used on the P-800 Onyx, that slow the airflow in the engine to subsonic speed, thus limiting the missile’s speed.

Tsirkon (also spelled Zirkon Циркон, in Russian) is a two-stage missile that uses solid fuel in the first stage and a scramjet (supersonic-combustion ramjet) motor in the second stage. The missile is designed by the Russian NPO-Machinostroeniya complex, the developer of the P-800 Onyx naval missile system and its predecessor, P-700 Granit. The missile received the NATO reporting name SS-N-33.

Believed to be the world’s fastest missile, Tsirkon outpaces western air defenses flying at twice the speed. Another feature making it hard to defeat is the typical plasma cloud developed around the missile during the hypersonic flight. This plasma cloud absorbs radar radiation making the missile invisible to the radar. If the missile develops hypersonic speed below the radar horizon, Tsirkon can conduct a surprise attack from a maximum range, with missiles detectable only at a much shorter range by imaging (thermal) sensors, such as those deployed on early-warning satellites, F-35 aircraft, and drones. 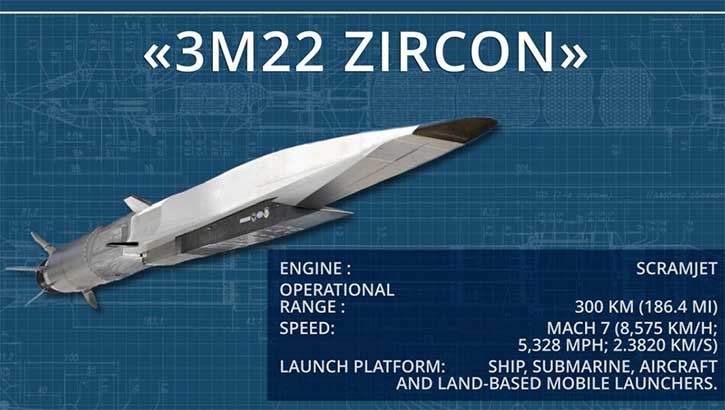 Lockheed Martin, Dynetics to Build a Hypersonic Missile System for the US Army