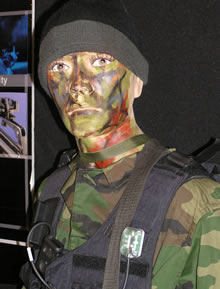 Fratricide Prevention activity: NATO
A four-nation Combat Identification Working Group (CIWG) has conducted field trials for its International Combat Identification Interoperability program at the Munster based Bundeswehr Armour School but so-far, while system evaluation continues, it is dependent on funding priorities. An even more ambitious program to reduce individual fratricide risk is based on the so-called Joint Expeditionary Digital Information (JEDI) system. This is based on a rugged field palmtop computer, satellite phones and laser binoculars, to pinpoint precise GPS coordinates of foe and friend, and pass the information over satellite phone network to forward control HQ. This equipment, when fielded will allow tactical commanders to track their troop locations during combat, reducing fratricide risk.

One of the problems encountered during development, was the deactivation of the Iridium satellites system and its replacement with Globalstar communications, which requires new adaptation process, taking valuable time and funding, which could be critical.

Fratricide Prevention Research – UK
All British AFV are to be fitted with a continuously emitting “beacon” using an M-band (94GHz) transmitter. The transmission is picked up by “shooter platforms” fitted with high-gain directional receivers. Brits claim low cost and very low power output as main advantages.

Fratricide Prevention Research – Israel
The Israel Defense Forces launched several programs to improve the management and tracking of ground forces, both on the low tactical level as well as the theater and operational level. Since the 1956 war the IDF implemented various signage to mark its own forces, and improve coordination between air and ground elements. Currently, activities are focused at improving the identification and coordination between infantry forces operating in urban terrain (MOUT), where recent misshapes and combat losses have demonstrated the urgent need for such capability. Among the systems used are the Combat Identification System (CID) for infantry troops, and Automatic Soldier Tracking System (ASTS) which collects an automatic situational picture of all forces at a certain area. Other efforts are aimed at better allocation of combat zones and improving coordination between neighboring units operated in a small area (such as in MOUT).