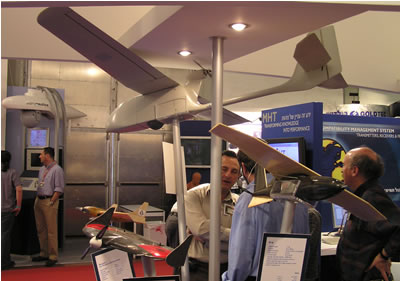 Various Israeli companies displayed new miniature UAVs developed in response for the IDF requirement for mini UAV for the battalion level and below. IAI displayed a wide range of UAVs, including the SpyThere, Birdy and the new Mosquito micro UAV. These three miniature aerial vehicles were designed by IAI’s aeronautical engineering division, as technology demonstrators for IMOD Research and Development Directorate. RAFAEL also brought its new version of the canister launched Skylark, which recently performed its first flight and TopiVision brought their miniature Casper 200 design.

Elbit and GFC both demonstrated the Skylark, which was recently procured for GFC testing. Elbit also brought the Hermes 180, a younger and smaller companion for the Hermes 450 which is currently operational with the IDF. Both models of the Hermes are currently in final stage of competition, as part of the Thales team, bidding for the British Watchkeeper program, where thales is competing against Northrop Grumman.

Larger UAVs at LIC 2004 included the Aerosky, which was operated in support for the IDF by Aeronautics Defense Systems for several years. Also on display were the Searcher, developed and fielded by the IDF and two new UAVs from EMIT – the Sparrow, which is currently in serial production and deliveries to equip one of the Asian Navies, and the Blue Horizon – used by the army of the Philippines.

Unmanned Ground Systems were also demonstrated by the IDF, which is already operating several types of tele-operated systems for specific missions. The ROEE tele-operated weapon carrier is an operational system, which can apidly deploy firing elements and sensors to positions located at high risk, exposed locations. A different robotic system is the Remote Controlled Tractor (RCT), used for clearing and activating mines and roadside explosive devices in sandy soil, in the securing of roads and axis for movement. The RCT is equipped with a video camera and a plough which is pushed forward of the vehicle, where it can detonate or unearth mines and explosives. The IDF is also evaluating a robotic buried mines locating platform. The lightweight tele-operated system has a low ground pressure, which enables it to move over a minefield. It is equipped with sensors which can accurately locate and mark The buried mines. Other small robots are operated bomb disposal teams.