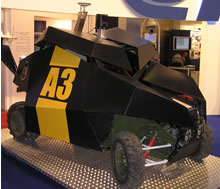 The pysical security fence is providing the core of the buffer zone security system. This obstacle will be augmented by a wide variety of sensors, weapons and security forces. The Ground Forces Command is preparing the ground work for wide scale deployment of such systems, which will include aerostats, observation towers and UAV patrols. The IDF plans to maintain the buffer zone with the minimum number of units, and will equip them to intervene as rapid response forces, employing all all terrain vehicles, such as Hummer tactical vehicles as well as other wheeled armored vehicles, considered effective for this role. Security forces will be deployed  in small detachments at high risk locations, from where they can will be able to respond quickly to every incident along the fence. Even faster response could be provided by autonomous vehicles, guarding specific sectors of the security zone, holding infiltrators until responding forces arrive. The IDF is using sophisticated tactical simulation of the buffer zone, for the operational planning and doctrine development. Such simulations evaluate different combinations of doctrine, tactics, sensors and response elements and assist in formulating the best, cost effective security measures for each sector.