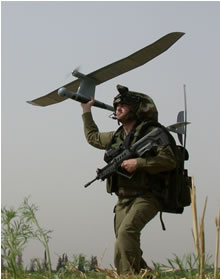 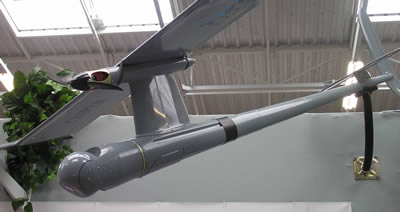 The Casper 200 miniature UAV was designed to meet an Israel defense Forces requirement for backpackable aerial surveillance, operated by a single soldier, in support of infantry operations. The 1.3 meter long MAV weighs 2.3 kg, and is constructed of composite materials. The Casper 200 is assembled in the field without any tools. The 2m’ span wing is optimized for low speed, and a 1:15 glide ratio. A larger version, Caster 250 was displayed at the Paris Airshow. This MAV is equipped with an improved LEV-2 payload with daylight CCD or IIR optronics, x3 stabilization and x25 zoom.

The ground component comprises an antennae group and a compact ground control station. The gimbaled payload is snapped on to the fore section. Casper 200 uses a lightweight (240gr.) payload, specially designed for small platforms, it accommodates a high resolution video camera with a x2 zoom or other sensors as required.

The Casper MAV is powered by an electric motor, which maintains a velocity of 21 to 80 km/h and rate of climb of 7 m/sec to an operating altitude of 70 – 250 m’ above ground level. Casper is hand launched and recovered automatically at a pre-designated point, utilizing a special wing structure that enables low speed soft landing even over difficult terrain.

The mini UAV demonstrated excellent handling and mission performance in open area as well as in urban reconnaissance, where it’s autopilot uses special obstacle avoidance algorithm. TopiVision claims the new system has superior performance compared to most of the mini UAVs of its class, due to the use of specific design, construction, particularly in the efficient aerodynamic design and telescopic, collapsible tail which effectively absorbs the landing impact. An innovative landing concept uses a wing flap to perform rapid but soft descent. Other features include improved communications, which contribute to significant power savings and cleaner aerodynamics, leaving more capacity for batteries and payload.