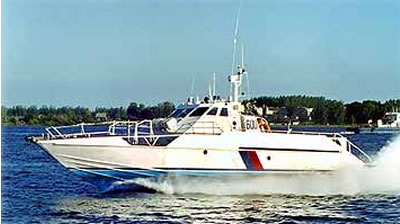 Two designs from Russia include the Mirage (Project 14310) and Mangust (Model 12150). The Mirage is designed with electrically controlled stabilizing fins which reduce the roll, pitch and vertical acceleration and enable the boat to remain operational in rough seas up to Sea State 7. It is equipped with two M520 diesel engines which provides a maximum speed of 48-50 knots. Mangust, a 19.45 meters patrol boat, has a fully loaded displacement of 26.2 tons. Powered by two Zveda M470 diesels, it develops a maximum speed of up to 50 knots. Mangust can endure missions of 1 – 2 days, manned with a crew of 6 men. Both types have similar weaponry including machine gun mounts that can accommodate 7.62mm, 14.5 mm machine guns, as well as AGS-17 automatic grenade launchers. Mirage, and the heavier version of the Mangust boat (Mangust-V) are also equipped with an AK-306 weapons mount comprising of an integrated, electrically driven six-barrel gun, four Vikhr medium range guided missiles, electro-optical guidance and fire control system, which can be used for precision attack of surface targets at sea, or land attack.