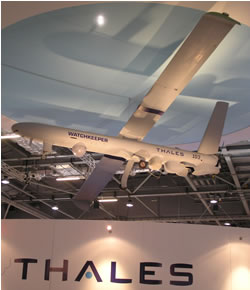 A new MOD program calling for the early demonstration of loitering weapons was unofficially unveiled at DSEI, with MBDA and Ultra displaying systems providing persistent coverage, deterrence and kill of enemy targets over a wide area and extended period of time. At present LMCD program is focusing on two systems – the White Hawk, proposed by MBDA based on IAI’s E-Harpy and the BLADE, proposed by Ultra, based on an armed version of the EMIT/RAFAEL Sparrow M. The loitering weapon will be able to deliver fast effects over a wide area, with pin-point accuracy.

Thales presented the Watchkeeper UAV system, expected to field by 2010 providing intelligence, surveillance, target acquisition and reconnaissance services the British Army. The program’s cost was trimmed to GBP700m with the decision to focus on a single platform (WK-450) and standard shelter-based Ground Control System (GCS).