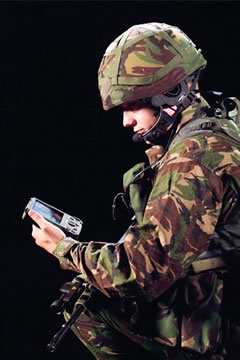 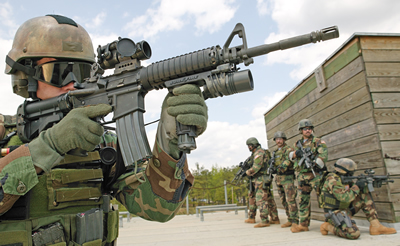 Infantry systems presented at DSEi included a wide range of weapons, accessories and gadgets designed to fit current warrior’s needs and future infantry suits such as the British FIST.

The British Army’s Future Integrated Soldier Technology (FIST) program is progressing well. At a briefing at DSEi, Thales indicated the program is on time and budget to proceed to the next phase of validation testing in October 2005. In the development and evaluation process Thales and the Defense Procurement Agency conducted some 50 equipment mini-trials as part of the system functionality testing and risk reduction process.

While FIST improves the full capability of the infantry warrior, the greatest enhancement of this capability will come from the introduction of command, control, communications, computers and intelligence (C4I) tools to the section level. Systems such as situational awareness applications are not expected to be available to all section members, but mainly to the junior combat leaders. At present, the section’s elements will include commander, grenadier, gunner and marksman – each role will be provided for by a specific variation of the FIST design. FIST suits will retain the current SA-80 A2 assault rifle. This weapon is already equipped with an optical sight’ a 40mm grenade launcher will be fitted to the grenadier’s weapon.

Quantum3D THERMITE, now in full production, was displayed at DSEi for the first time. THERMITE is a man wearable, high performance, real-time tactical visual computing device. As a man-portable computer, the new computer supports real-time 2D/3D tactical visual processing utilized for embedded training, mission rehearsals and deployed C4ISR applications. The small size THERMITE weighs one kilogram without batteries. 3D images and “virtual environments” processed by wearable computers such as THERMITE can be displayed by lightweight visors, such as the Z800 3D visor, developed and produced by eMagine.

Z-800 provides immersion-capable 3D computing experience, enabling the soldier or combat analyst to be surrounded with visual data they need to conduct realistic training. Apart from training, such immersive viewers can be used for remote control of systems, command and control. The viewer comprises two Organic LED (OLED) microdisplays providing full-motion stereo video in 16.7 million colors. The visor weighs less than 8 oz and provides an image resolution and size comparable to 105 inch projection screen viewed from four meters. To support the virtual reality scene, 3D audio communication can be used. 3D audio applications are already considered for Soldier modernization systems. One such program is under development by a team led by Sennheiser Canada under the Canadian Soldier Integrated Headgear System (SIHS) program.