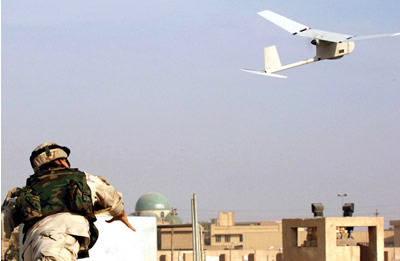 Tactical aids are extremely important for Command, Control, and Coordination of urban combat operations. While maps may be sufficient to coordinate operations in an open area where targets such as tanks, enemy troops, or prepared positions can be clearly defined by distinctive shapes and coordinates on a map, typical urban targets look different depending on viewpoint. The details of the information delivered to the combat units must therefore match the unique requirements of each situation.

Intelligence with this level of detail may not always be available in advance. Therefore, tactical units tasked with UC must develop and maintain internal intelligence collection capabilities. Ground observations, pre-planted Unattended Ground Sensors (UGS), Unmanned Aerial Vehicles (UAV), and Unmanned Ground Vehicles (UGV) are some of the systems available for data collection. Thanks to advances in communications technologies, sensors do not necessarily have to be “owned” or even controlled by the supported unit in order to provide it with usable information.

Operations conducted by Special Operations (SO) forces usually require extensive intelligence support, including long range airborne and ground based observations, electronic intelligence and signal intelligence support by special mission aircraft and UAVs, etc. SO forces are also equipped with the means of receiving data from, and exercising control over these systems, as part of their C4ISR capabilities. When operated and coordinated as integral parts of the operation, these C4ISR elements play a critical role in the security of the ground forces and the success of their missions. While maintaining a clear and constantly updated visual situational picture of friendly and hostile forces, these intelligence-gathering systems are also locating and reporting the target’s status and activity. When integrated with weapon systems, these elements can also be used to engage the enemy.

Unmanned assets will become an integral part of the arsenal of the new Unit of Action, the basic maneuver element that will be equipped with the Future Combat System, which the US Army is expected to field by in the next decade. These unmanned assets will include four different UAV systems, at least two UGVs, remotely deployed UGS systems, and other sensors not organic to combat units. 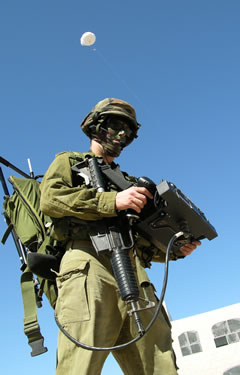 These sensors are not ‘futuristic’. Forces are already using some of these systems, including the Aerovironment Raven, Elbit Systems Skylark mini-UAV, the i-Robot Pacbot ground surveillance mini-robot, and the Dragon Runner, which is operated by the US Marine Corps. Unattended Ground Sensors (UGS) designed to mimic rocks or tree trunks, can operate covertly tens of kilometers deep in enemy territory for months without any kind of direct support. UGS have been used operationally since the Vietnam War, but in recent years, they have become smarter, evolving into highly capable area surveillance systems. These autonomous or unattended systems can also be equipped with weapons for rapid closure of the ‘hunter-killer loop’. Similar methods are used for the control and integration of snipers, operating as covert observation and attack elements.

Remote Video Terminals (RVT) enable tapping into available video streams to retrieve analog video data in real time. More advanced net-centric systems, such as Northrop Grumman’s (NG) Advanced Information Architecture (AIA) enable the warfighter to retrieve information from databases that store feeds from multiple remote sensors and intelligence services, providing access to huge archives of imagery and intelligence in real time. Users can find items through information searches, just as they do on the Internet. NG has recently conducted a demonstration of this system for the US Marine Corps and has integrated elements of it into the Global Hawk system in support of the forces currently deployed in Iraq.
Real-time imagery is becoming a critical element for the modern warfighter, but bandwidth resources available for the transfer of these video streams are limited. Therefore, the networking systems serving the combatants are being modernized. These new networks will provide much wider bandwidth, enabling multiple networks to coexist in the same geographical area, without interference or degradation of Quality Of Service (QOS). These wireless networks must employ robust, highly secure communications in order to protect this critical asset from hostile information warfare (IW) attack. Hostile attack activities can range from probing and intelligence gathering, to causing service degradation, and exploitation (deception). Other UGS might include snake or caterpillar shaped robots equipped with imaging sensors for scouting subterranean environments, and even an expendable dragonfly shaped “creature.” Several of these ‘dragonflies’ can be rolled into a cigarette pack sized container. When released, they will be capable of flying around inside a building for several minutes, while sending valuable real time information to the operating unit.

Unattended sensors are another class of ISR assets currently under development that will be particularly effective in urban warfare. UGS are now providing secure outer perimeters for force protection and ambushes as well as providing persistent surveillance of suspected insurgent locations. Advanced UGS currently under development include unattended, remotely controlled, multi-sensor devices that can detect nearby movement by seismic, magnetic or thermal sensors, then activate an un-cooled FLIR or a color camera to send a compressed snapshot of the event via secure, low-probability of detection communication.

Other new devices are designed specifically for urban warfare. Planted in cleared or deserted buildings, these sensors can continuously verify that the area has not been recaptured by hostile troops, or can provide security at entries to areas where friendly forces are located. Other urban UGS include electromagnetic sensors that can “see through walls.” Video/acoustic “eyeballs” used by SWAT teams can be rolled into a room to report on the status inside before troops are committed. A new rifle-launched arrow-shaped camera can be fired at a specific point subsequently delivering a remotely controlled video feed for several hours. Other disposable sensors can be fired from grenade launchers, shoulder fired weapons or can be dropped by parachute over the target, to provide an aerial view of it just before an assault.