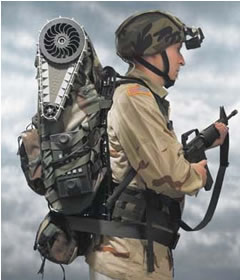 PackBot was first used by US ground troops in Afghanistan in 2002 to help clear caves and bunkers, search buildings and cross live anti-personnel minefields. They were used again in 2003 in Iraq in urban warfare scenarios, as well as in vehicle searches. By 2007, more than 800 PackBot robots were delivered to users worldwide and are in operation in Iraq, Afghanistan and around the world.

PackBot uses a unique propulsion system developing a road speed of up to 14 km/h. The system is characterized by distinctive “flippers” which offer continuous 360 degrees rotation and negotiation of rough terrain and obstacles such as stairs, rocks, logs, rubble and debris. The platform can climb grades up to 60% and survive submersion in water up to two meter deep. It is built to survive drop from two meter height, on a concrete surface, or being thrown through a window or tumbling downstairs. The 18 kg robot can be carried in a backpack, and deployed in a few minutes. The PackBot chassis is integrated with a GPS receiver, electronic compass, orientation and temperature sensors. The robot is controlled by an integral Pentium based computer. It uses a modular payload system offering standard (USB, Ethernet) communications and networking. The control station uses laptop PC or eyepiece displays and hand-held controller. Wide angle (fisheye) or close-up images are displayed for orientation with all operating parameters.

PackBot is provided in several models and configurations

the most rugged configuration, 18kg fully loaded vehicle, 20 cm height, Scout can use sensors hull integrated sensors which are suitable especially for operations in places where lightweight and low-profile are required.

This version of the PackBot carries an integrated payload in a pan-tilt payload which can be elevated to allow peeking over obstacle or cover. The payload is equipped with multiple cameras, laser pointer, microphone and other sensors.

is equipped with an OmniReach manipulator system to allow it to extend over two meters, when examining suspicious objects on Explosive Ordnance Disposal (EOD) missions. Typical low profile of this platform allows PackBot to operate effectively under vehicles or inside sewers.

On January 30, 2007 iRobot and ICx were awarded a $16.58 million order for the delivery of more than 100 explosive-detection robots. Initial shipments are expected to be delivered during the first half of 2007 to U.S. military units deployed in Iraq. The PacBot 500 robots will be equipped with the Fido explosive-detection technology developed by ICx Technologies. These sensors detect explosives’ vapors emanating from Improvised Explosive Devices (IEDs).

The latest PacBot 510 EOD Model will be available in April 2007. This second-generation EOD robot was designated to address evolving requirements for a stronger, faster and easier-to-use robot. Equipped with an EOD Kit, PackBot 510 is 30 percent faster, can drag larger objects, lifts twice the weight and has a grip that is three times stronger than its predecessor. the new robot uses a game-style hand controller for faster training and easier operation in the field. This new robot will begin shipping in April 2007. The robot’s new hand controller is modeled after video game controllers, making PackBot 510 easier to use, and resulting in less training time and more rapid operations in the field. In addition, the advanced track technology significantly increases the robot’s performance on rough terrain.

At AUSA 2008 iRobot introduced new accessories for the Pacbot 510. Among those was the head-aimed remote viewer (HARV) developed by Chatten Associates. By duplicating the operator’s head motions this control mechanism increases the UGV operator’s performance by 300-400% demonstrated in tested conducted under DARA and the Army Research Labs studies. The system comprises of a visor embedded with an OLED display and an electronics and power unit. The system can utilize the vehicle’s existing communications link. 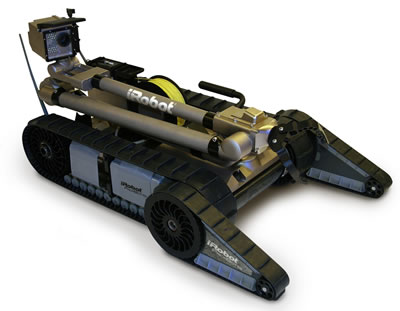 iRobot will use the same propulsion concept for the 10 kg Small UGV (SUGV) platform for the US Army FCS program, as well as a 150 kg class Warrior (formerly NeoMover) heavy battlefield robot.

In October 2006 iRobot launched the Sentinel program, introducing new capabilities to control multiple robots by a single operator. Sentinel will coordinate multiple semi-autonomous robots utilizing intelligent navigation algorithms enabling each of the robots to reach their designated destination independently, overcoming obstacles without intervention from an operator. The program is funded by the U.S. Army’s Small Business Innovation and Research (SBIR) program. The system will enable operators to send PacBots teams on surveillance and mapping missions, rapidly covering a wide area.

At AUSA 2008 iRobot launched its latest family of small UGVs called SUGV300 family of robots. A member of this new family, the SUGV320 is the robot designated for the future FCS mission (SUGV) while other versions are being produced for near term fielding, as part of the first ‘Spinout’ of the FS program. Among these are the SUGV300 designed as a basic reconnaissance lightweight robot and the SUGV310, designed for dismounted EOD missions. The ‘300 is the basic platform, without payloads, weighing only 25 lbs (11.3 kg). All the SUGV300 family robots fit into the soldier’s backpack (MOLLE) or ALICE packs, and are powered by standard BB-2590/U batteries for more than six hours of operation.

iRobot is producing PacBots for US forces under a $43 million Naval Sea Systems Command’s Man Transportable Robotic System (MTRS) program. The company produced over 500 PacBots of different types. On July 28, 2006 iRobot announced an UK MOD order for 30 PacBot EOD robots, for deployment with British Forces in Iraq and Afghanistan. Under another contract announced in August 2006 iRobot will supply 18 PacBots to the German Bundeswehr. The initial 18 EOD systems will be delivered in 2006. The Germans have an option to buy 22 additional robots in 2007. 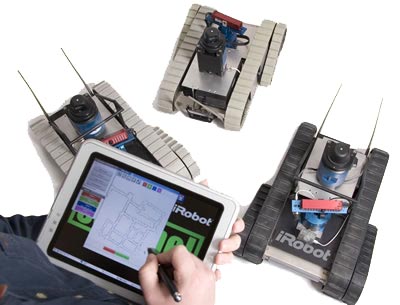