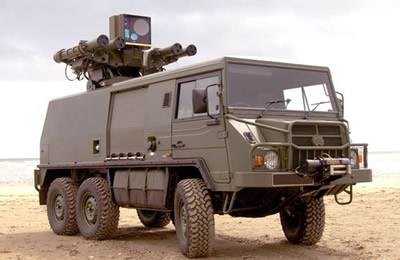 Thor comprises a four-missile turret with an integral stabilized sighting system, TV camera and thermal viewer and integrated auto-tracker, providing 24 hour capability. The system mounted the Starstreak High Velocity Missiles (HVMs) in the ready-to-launch position. Starstreak HVM is a laser-guided missile with a maximum speed in excess of Mach 3 and a range greater than 6km. Starstreak is in service with the British and South African armies.

The launcher weighs about 500 kg and can be integrated onto a range of wheeled or tracked vehicles. Preparing for what Thales defines as “force protection” missions; Thor’s missile payload is not limited anti-aircraft missiles. The system can carry a mix of missiles, including Hellfire anti-tank laser homing missile, and SPIKE multi-purpose missiles and the South African Ingwe. According to Thales, the system already entered a series of test firing to demonstrate and validate its capabilities. The system can be operated by a single person but the normal crew consists of two – commander and gunner.