Hellfire is currently produced in three configurations – Anti-Tank, Blast-Fragmentation and Thermobaric. A choice of semi-active laser and milimeter wave active seekers are also available. The 45kg Hellfire II missile (48kg in AGM-114M version) offers operational range of 0.5 to 8 km, and utilizes a semi-active laser seeker which has improved targeting capability, including advanced processing to solve laser obscurant/backscatter problems identified during combat engagements in 1991.

Hellfire II locks on before or after launch and can engage multiple targets simultaneously. The missile uses Trajectory Shaping to enable optimal performance in degraded weather. Operation under degraded weather conditions are also improved with automatic target reacquisition after loss of track in low clouds.

The digital autopilot can be reprogrammed in flight, to home in on new targets in when employed in a Lock-On After Launch mode. Hellfire II is also uses equipped with electro-optical countermeasures hardening. The missile is capable of operating with pulsed radar frequency or A-Code laser codes for those aircraft equipped with dual code capability. 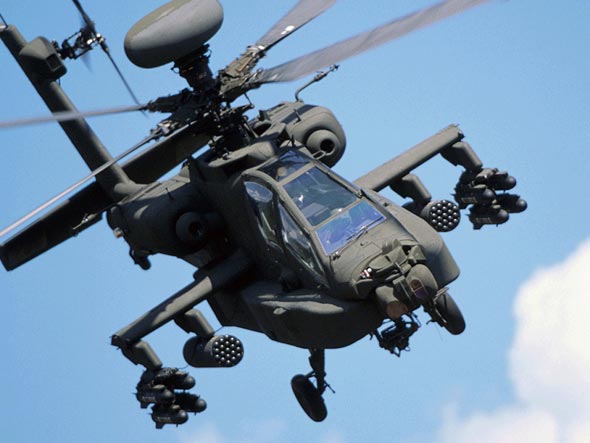 When employed with the AH-64D Longbow mm radar targeting system, the missile can also be equipped with a millimeter-radar seeker, which enables “fire and forget” operation in adverse weather, dust and smoke. The Longbow missiles are fully compatible with the launchers carried on the Longbow Apache which also carry the AGM-114K/M laser guided missiles. Beside autonomous homing on targets designated by the Longbow Fire Control system, the missile can also use advanced modes, currently being upgraded to the system, which provide home-in on active jammers that try to degrade or disable the missile. The missile will also receive advanced countermeasures to defeat and cancel jammers.

The Hellfire AGM-114K anti-tank version has been modified to improve its fragmentation capability, when engaging soft targets. The Mod-K modification, pursued by Dynetics for the Aviation & Missiles R&D and Evaluation Center, included the installation of a fragmentation sleeve placed around the shaped charge, optimizing fragment lethality against a broad target set, while minimizing degradation of shaped charge performance. 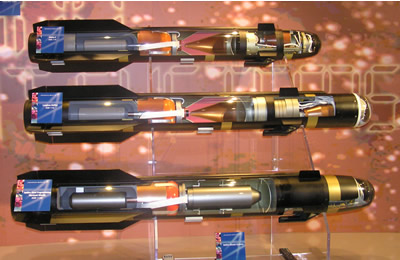 Thermobaric version of the Hellfire

Hellfire thermobaric warhead using a metal augmented explosive charge is used primarily in urban warfare, against bunkers, buildings caves and other concealed targets. This warhead is designed to inflict greater damage in multi-room structures, compared to the Hellfire’s standard or blast-fragmentation warheads. The Metal Augmented Charge or MAC (Thermobaric) Hellfire, designated AGM-114N, has completed rapid development cycle in 2002 and was deployed during OIF by US Marines Helicopters in Iraq. The new warhead contains a fluorinated aluminum powder that is layered between the warhead casing and the PBXN-112 explosive fill. When the explosive detonates, the aluminum mixture is dispersed and rapidly burns. The resultant sustained high pressure is extremely effective against enemy personnel and structures. The AGM-114N is designed for deployment from helicopters such as the AH-1W or UAVs such as the Predator drones.

The combination of Hellfire II’s precision guidance and Longbow fire control and Hellfire’s fire-and-forget millimeter-wave seeker capability provide the battlefield commander flexibility across a wide range of mission scenarios, permitting fast battlefield response and high mobility not afforded by other anti-armor weapons. The Longbow variant of the Hellfire missile is designated AGM-114L.

Greece is seeking to add 657 AGM-114 Helfire II missiles to equip its ground forces. The Greek armed forces are requesting the US for 633 AGM-114K1 anti-tank missiles fitted with a tandem HEAT warhead and 24 AGM-114M1 missiles equipped with Blast Fragmentation warheads. The deal worth US$66 million also include Hellfire II Training and drill missiles and technical support.

SInce 2007 the U.S. Army invested over $18 million in modifying Hellfire missiles to better adapt for operating at higher altitude and wider engagement geometries, better suitable for deployement with unmanned aerial systems such as the Predator , Sky Warrior and Reaper. The required modifications include the replacement of the gyro into a MEMS-based inertial measurement unit (IMU), and introduction of software changes increasing the missiles engagement geometries and its capability to defeat a broad target set ranging from heavy armor to urban structures. The Army plans to modify the AGM-114-2K (anti-tank shaped charge) and AGM-114N (enhanced blast warhead) into the new AGM-114P+ model. The missile will also be compatible with all rotary-wing platforms.