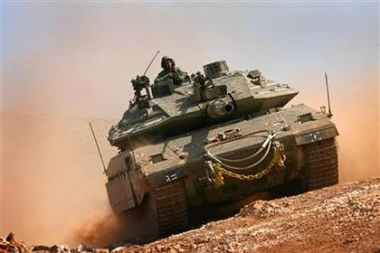 The development of an indigenous Israeli tank began in 1970, after plans to locally produce the British Chieftain tank were cancelled by the UK, which preferred selling the tanks to Arab countries (Chieftains and Challengers were eventually sold to Jordan, Iran and several Gulf states). At the time, Israel was using British Centurions and US made M-48 and M-60 tanks, most of them modified with 105mm tank guns while the Syrian and Egyptian armies received the first T-62s from the Soviet Union, equipped with more powerful 115mm guns. Israel required two different types of platforms to better cope with the different terrains – the Centurions were slower, but their automotive system, primarily the track and suspension, was more suitable for the rough, volcanic, rocky terrain of the Golan heights while the wider padded tracks of the American M- series tanks was suitable for the soft, sandy plains of the Sinai desert. 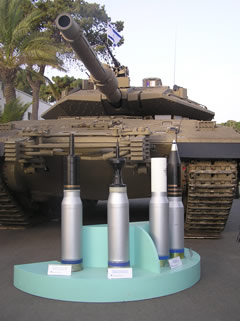 At that time, Israel was preparing for the next phase of the conflict. The requirement for an up-gunned, better protected platform was clear, in face of the T-62s and evolving anti-tank missiles, which was yet to be experienced, three years later.

Faced with the demise of the British tank option, experienced with similar fate of other arms procurements, from France (the French embargo on the delivery of Mirage V fighters and Missile boats already paid for by Israel) Israel decided to base its armored force on a totally new platform, designed to perfectly match and reflect its unique priorities and requirements. The basic requirement, clearly defined by General Israel Tal, the “father” of the Merkava tank, was protection. While most tanks designed for the 1980s were already equipped with 120mm gun, the first two generations of the Merkava retained the 105mm. This was the result of the priorities and tradeoffs considered by the designers. All tanks, from the prototype to the Mk 4 share a similar chassis, automotive system and turret design. The differences are reflected in the details, and balances between mobility and firepower. Following General Tal’s guidelines, protection remained the highest priority for the Merkava and was never compromised. The initial design, reflected in the Merkava Mk 1 already determines the basic design envelope, with a triangular, flat turret, fitted with typical armor protection cells installed on both sides of the gun. The forward mounted engine, clearing the rear area for an access hatch, stores, and flexible reconfiguration options which are currently taking shape. Merkava has been the longest production program in the history of Israel’s defense industry. The tank has been in production for more than 30 years. In fact, this year the first Merkava Mk 1 tanks which entered service 25 years ago, are scheduled to be withdrawn from service, as they are replaced by latest Merkava Mk 4. For nine years, (1970 to 1979) the program went through development, prototyping and field testing, culminating in the delivery of the first Merkava tank to the IDF in 1979. A parallel process was the establishment of the local tank manufacturing industry, which required the expansion of steel casting facilities at Urdan, and expansion of IMI’s tank gun manufacturing facility, where the new 120mm gun was developed. Hundreds of additional facilities, most of them privately owned small businesses; many located at disadvantaged and remote peripheral cities joined the program, to establish the industrial base for the new program. 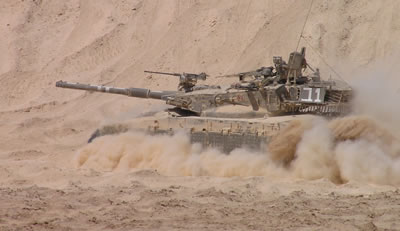 Only three years later, immediately after the Lebanon War in 1982, the next generation, Merkava Mk 2 was delivered. In fact, this tank was the more mature version of the basic Maerkava 1, a result of the “telescopic development” process, which envisaged continued development based on lessons and feedback from users, rather than a slow and linear operational testing process.

The Mk 2 introduced new, clearly distinctive ‘special armor’ modules installed on the turret’s sides and skirts. The tank retained the 105mm gun with the benefit of ammunition availability and commonality, yet, the tank was equipped with improved fire control and optronic equipment, bringing it to the same level of the IDF fully upgraded M-60s (with the Merkava offering superior protection). 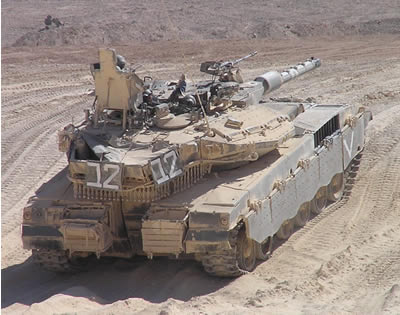 Seven years later, by 1989 Merkava Mk-3 introduced a more dramatic leap, fielding a new, modular armor concept, enabling a rapid and frequent process of adaptation of armor to operational requirements and evolving threats. The tank was equipped with a new 120mm gun, produced by IMI and a new 900 hp diesel engine developed by the German firm MTU. Through an evolutionary process, the Merkava Mk 3 was upgraded with at least four versions, equipped with different armor configurations, and various types of fire control and optronic system, which, for the first time, was superior to the systems used in the M0-60s. Many of the changes were based on feedback and lessons learned through operational and combat experience in Lebanon and Gaza. As a result, the IDF decided to gradually phase out the Centurion and M-60s, and moved toward an armored force based entirely on Merkava platforms. This process culminated in 2005, when the last regular unit, equipped with M-60s replaced the aging American tanks with the latest Merkava Mk 4 tanks. At the same time, the developer’s team was already working on the Merkava 4, primarily the new engine, which was under development in Germany.