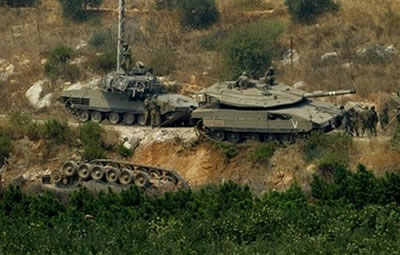 A record of one combat action in Lebanon, on July 31st, 2006 tells the story of a joint task force which included elite infantry teams from the Nahal (900) infantry brigade, Merkava Mk4 tanks from the 401st Armor Brigade, and combat engineers.

During the activity, a Puma Combat Engineers armored fighting vehicle carrying Carpet counter-mine systems rolled over and overturned into a ravine wounding three crewmen. The tanks rushed in to cover the evacuation and recovery, facing Hezbullah anti-tank fire. The tanks and infantry returned fire, while calling artillery support to create a smoke screen while the tanks deployed their own smoke to mask the forces from enemy missiles. Although damaged, all forces returned safely. The vehicles and tanks were sent for repairs at the IDF tank depot, which has already completed the repairs of Merkava tanks damaged during the first days of the fighting.

For a video record of this incident click here, as recorded by Israel’s Channel 10 news.