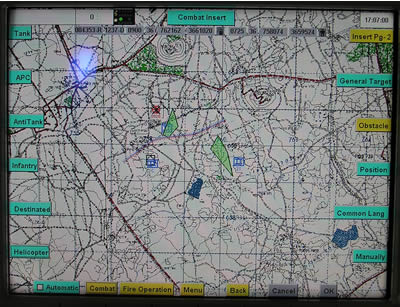 In addition to the machine guns, all weapons and sensors are linked to the Battle Management System (BMS) and can thus be operated and monitored from any crew station, providing flexibility through crew task assignments.

The tank is equipped with dual range thermal imaging optics to cover both 3-5 micron and 8-12 micron channels in order to provide improved performance and redundancy under all visibility conditions, day and night. The imagery resolution and performance of the tanks optronics matches the most sophisticated systems currently in service, offering exceptionally clear visibility under all weather conditions. Further enhancements of the optronic capability include an improved target tracker that is designed to effectively combat low-flying helicopters, as well as image processing software that can detect human ground activity. The tank is also equipped fixed video cameras covering the rear and sides of the vehicle.

The tank is designed as a net-centric system with four redundant networks, which use standard TCP/IP Ethernet protocol. The network is managed by dedicated servers for the turret and hull. It also has a digitally controlled power distribution system for the turret and all weapon and observation systems. The crewmembers use common workstations, which connect to the tank’s ‘intranet’, to operate and display specific information.

In a typical situation, the tank commander views BMS, his independent sight display and monitors the gunner’s view. The gunner monitors his sight display, orientation, and target data. The loader monitors ammunition count, communications and perimeter views, and the driver monitors engine controls, thermal forward view and rear camera. All crewmembers can view emergency information, such as threat indications, fire alerts etc., and share resources such as communications, video etc.

According to Lt. Colonel Nissim Nissim, Systems manager at the Merkava Program Office, These networks were recently enhanced with external wireless connectivity, enabling the latest Merkava 4 tanks to share sensor data, situational displays and other information with nearby tanks or other units. He told Defense Update that the current Merkava was designed with sufficient power, processing, communications and interfaces to enable future growth, including adding crewmembers, sensors and processors.