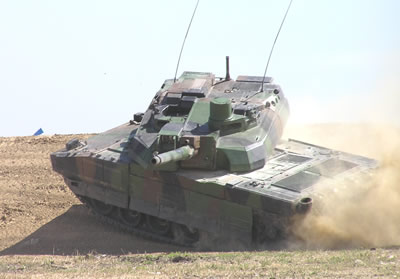 Eurosatory 2004 is undoubtedly the most important global gathering of land and land-air defense equipment manufacturers. This year, the event attracted some 45,000 visitors and 977 exhibitors from 45 countries. 124 official delegations also attended the exhibition and its associated conferences. Among the highlights of the show was focus of the French Minister of Defense, Madame Michèle Alliot-Marie, to position French defense industry with leadership positions in European partnerships, leading to the creation of a genuine European armaments industry. French Army programs announced at the show included orders for 72 CAESAR 155mm guns, to be delivered by autumn 2004, acquisition of the first FELIN infantry combat suits as early as 2006, and the production of drone and the future Air/Land Operational Bubble (BOA). In the UAV sector, the French MOD launched the strategic Euromale UAV demonstrator project, to be developed under the cooperation between EADS, Dassault and Thales so far active mainly on Unmanned Combat Aerial Vehicles (UCAV). The French defense budget was increased under a five year program (2003-2008) addressing the severe maintenance shortcoming which persisted since 1999 – 2000, contributing to recovery in related industries, such as GIAT, DCN, SNPE and SNECMA.

Defense Update coverage of Eurosatory 2004 is focusing on: