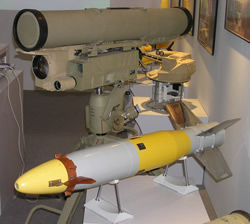 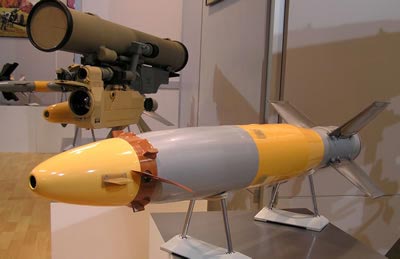 This semi-automatic laser beam riding missile is effective at ranges of 100 – 5,500 m’ in daytime and up to 3,500 m’ at night. The missile utilizes a tandem shaped charge anti-tank warhead or a thermobaric (fuel-air explosive) charge, for anti-personnel and anti-material blast and incendiary effect. The manufacturer claims penetration of 1,200mm of steel armor or 4.5 meters of concrete. The NATO designation of the Kornet is AT-14.

A firing unit consisting of launcher, thermal sight and a single missile container weigh 65 kg and can be installed and ready for action in 3 minutes, operated by 3 men. Most often, the missile will be deployed on vehicular platforms, a modular design for such launcher can utilize a lightweight launcher or an integrated turret designed for a hummer sized vehicle, integrated with the thermal sight and four ready to fire missiles and five more in stowage. Other configurations include an automatic, remotely operated win-missile turret installed on the BMP-3 (16 missiles, of which 12 are stored in an autoloader) and BRTR-80 chasis (12 missiles, 8 in autoloader). The missile’s launched is fitted with thermal imaging system, to facilitate effective operations under low visibility, day and night.