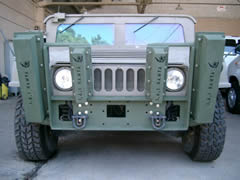 Detection and neutralization systems against a broad spectrum of threats, including mechanical, magnetic, heat and pressure sensitive mines. MBDA demonstrated at Eurosatory an enhanced mine countermeasure system based on the operational SOUVIM, in use by the French Army. Another system – Dedale magnetic decoy device which activates magnetically fused mines at a safe distance from the carrying vehicle was also on display.