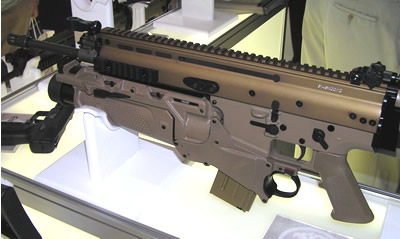 SCAR L (above) is a 5.56 mm assault rifle, which will be replacing the M4A1, Close Quarters Battle Rifle (CQBR) and Mk12 currently in SOCOM service. SCAR H, a 7.62mm assault rifle (below), will replace the M14 and Mk11 sniper rifles. Both variants share 90% commonality and will have a choice of three barrel lengths, allowing operators to tailor the weapon for specific operations, using a “standard”, Close Quarters Combat (CQC), or “sniper” barrels. These changes will affect the velocity and directly relate to lethality. The EGLM is a 40mm grenade launcher with a side-opening breech to allow loading longer munitions, and has target ranging and ballistic solution for enhanced fire control.

Following the final design review of SOF Combat Assault Rifle (SCAR), FNH is completing the finalphase of development and is preparing for serial production of the new weapon. After a series of design reviews and testing with United States Special Operation Command (USSOCOM) and Naval Surface Warfare Center (NSWC Crane) the SCAR is ready for low-rate initial production. Delivery of first 1,000 out of the total 85,000 rifles included under teh SOCOM contract are scheduled to be delivered by January 2007. The SCAR will be built at the FN Manufacturing LLC, plant in Columbia, South Carolina.

Following SOF specifications, SCAR has multiple MIL-STD 1913 rails (Picatiny rail) enabling flexible configure the weapon for various missions. On the top of the weapon (12 O’clock) a long rail is running continuously from the rear sight to the front sight, where sights, night vision devices or cameras are commonly used. Additional rails are attached to both sides and at the bottom, in the fore-arm and hand guard area. All rails are boresight aligned with the barrel, thus eliminating the need of individual zeroing of each configuration. These rails are designed as part of the weapon’s structure, improving durability, isolating the harmonic vibrations induced by the barrel during automatic firing. The bottom rail (6 o’clock) enables installation of future systems more closely to the gun barrel thus improving aiming accuracy and reducing error rate, especially at long range. It is designed with higher durability to withstand recoil forces generated by the Enhanced Grenade Launcher Module (EGLM) producing a pressure of 230 bar. All SCAR types will be compatible with EGLM, including SCAR-L.

The new family of rifles was optimized for ergonomic handling and reliability, availability and maintainability (RAM). Parts commonality between the SCAR-L and SCAR-H will be maximized to create a family of SCAR weapons. The weapon is finished in a durable desert tan color, specified by SOCOM. It is manufactured to be corrosion resistant, and is capable of lube-less firing. The commonality between all models is essential to reduce training time, improving the SOF operators ingrained operational and emergency procedure autonomic responses that are critical during high stress situations.

SCAR is following a SOCOM Joint Operational Requirements Document which defined high reliability standards for the assault rifle. SCAR is designed to meet x3 times the reliability levels, compared to existing assault rifles such as the M4. 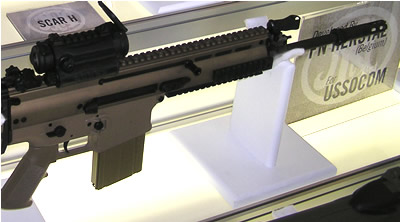 On February 2006, at the Las Vegas SHOT Show in Nevada, FNH announced plans to introduce within two years (ca. 2008) a semi-automatic version of the SCAR modular rifle system, designed for the law enforcement and commercial markets.