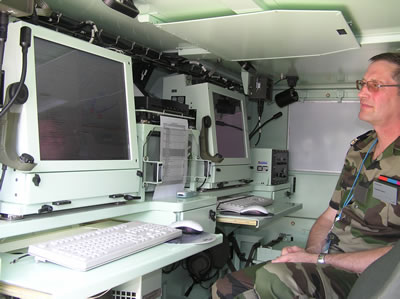 With the progressive fielding of tactical radios capable of voice and data transfer, as well as dedicated data radios, the next step in the evolution of tactical command and control is the creation of a  “tactical internet”, enabling combatants at all levels to exchange and access information from any connected source. [email protected], a mobile tactical internet developed by Thales, is an example of this type of network. Similar systems displayed at Eurosatory 06 included the digital networking system, based on the Israeli Army DAP developed by Elbit Systems and the new [email protected] system, developed by Tadiran Communications.

A new concept of integrating planning, rehearsal and operational control was demonstrated by EADS with the new APLET tactical engagement planning tool, which is intended for motorized and armored brigades and is interoperable with the French Forces’ SICF C3 system. The system simulates the structure and operations of French Army Battalions, enabling the Brigade staff to simulate a 24 hour operation ito fit into a 10 minute time frame.

Tadiran Spectralink introduced the new TARGET (Tactical Ruggedized Video Transmitter) to enable video and data transmissions for special operations forces. The miniature transmitter weighs only 140 grams and can operate continuously for 3 hours on its battery power. This device can be connected to a video camera carried on a miniature unmanned platform, a helmet mounted camera carried by a soldier or coupled into a sniper’s sight, to transfer the views to command elements to ranges up to 2,000 meters. Video signals can be received by standard remote video terminals, such as V-RAMBO, VTVR and TVL-II.