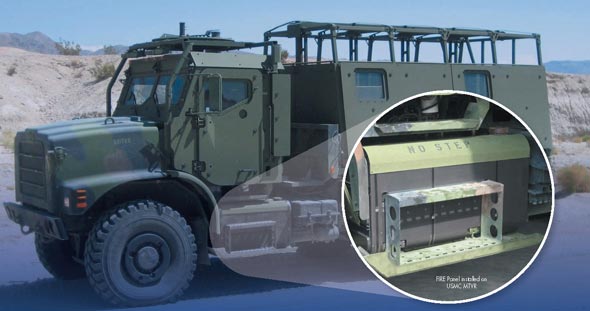 The FIRE panel was created to inhibit explosions and prevent catastrophic fires in the fuel tanks of aircraft and ground vehicles during an attack.

As vehicle crew compartments become more protected, attacks are directed to other vulnerable parts of the vehicle, including the fuel tank. The fuel tank has increasingly become the target of hostilities due to the flammability of the contents as well as the possibility of an explosion. The explosion and ensuing fire typically incapacitates the vehicle, forcing the crew from out of the protection of the hardened compartment.

FIRE Panel was designed by Firetrace Aerospace to protect fuel tanks form explosion and catastrophic fire following the impact of a variety of threats, including small arms fire, explosive ordnance and IEDs. It can be applied in the field, and requires no special tools or training. The panel can be molded to protect virtually any size or shape of a fuel cell. It can be designed from a single panel, to protect a small or mid-sized application or a series of panels, to protect a larger surface. The panel weighs only 25% of the weight of a comparable armor shield. It also costs considerably less than standard armor.

Unlike an armor shield, the FIRE panel is not designed to stop the threat from penetrating the fuel tank but rather to inhibit the explosion and prevent a fire from such an event. The panel is fabricated from a blend of polymers featuring chambers filled with fire suppressing powder. When the panel suffers a high-energy impact (by shrapnel or round) the suppressant is released around and into the impact area thus proceeding rather than reacting to a potential fire. The vehicle, through damaged, is able to leave the engagement under its own power and can be easily repaired and returned to service.

On September 13th, 2006 The US Army Tank automotive and Armaments Command (TACOM) awarded Firetrace Aerospace a US$3.8 million contract to install 164 FIRE Panels kits on its Heavy Equipment Transporter (HET) vehicles. Similar devices are being evaluated by the USMC for its MTVRs. The same technology is also available to protect jerry cans in the field.