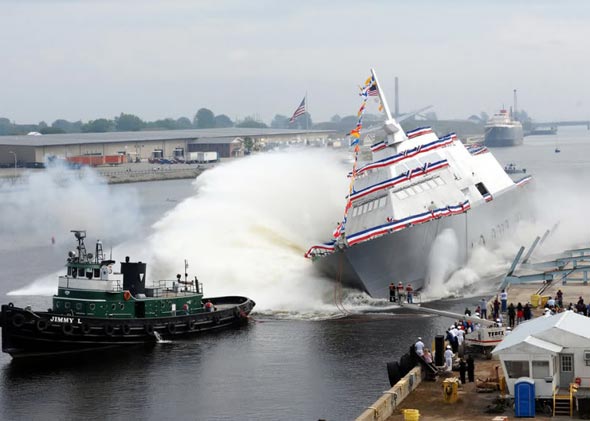 The new LCS will provide a platform for intelligence gathering, employ surface (anti-ship) and land attacks precision weapons, and operate manned and unmanned aerial and surface vehicles (UAV/USV). To further adapt for specific missions, LCS will incorporate a modular and interchangeable approach, enabling it to be reconfigured to specific missions such as antisubmarine warfare, mine warfare, or surface warfare missions on an as-needed basis. The LCS will be able to swap out mission packages pier-side in a matter of hours, adapting as the tactical situation demands. These ships will also feature advanced networking capability to share tactical information with other Navy aircraft, ships, submarines and joint units.

Freedom is specifically designed to operate in shallow water environments to counter threats in coastal regions, specifically mines, submarines and fast surface craft. The 377 foot vessel has a displacement of 3,000 metric tons and is capable of speeds in excess of 40 knots and can operate in water less than 20 feet deep. The ship is designed with a survivable, semi-planning steel monohull offering proven sea-keeping characteristics and good maneuverability to support launch and recovery operations, mission execution and optimum crew comfort.

USS Freedom was christened today (Sept. 23, 2006) as the first Littoral Combat Ship (LCS). Built by Lockheed Martin at the Marinette Marine shipyard, USS Freedom is the first of two LCS sea-frames produced for the US Navy. FREEDOM will continue to undergo outfitting and testing at Marinette Marine. Upon the ship’s commissioning in 2007, Freedom will be home-ported at Naval Station San Diego, California.

The Lockheed Martin LCS team received a contract in June 2006 to build a second Littoral Combat Ship. Construction on this ship, yet to be named, will begin in Bollinger Shipyards Lockport, LA (near New Orleans), in early 2007. The Lockheed Martin-led industry team for LCS includes naval architect Gibbs & Cox, ship builders Marinette Marine Corporation, a subsidiary of The Manitowoc Company, Inc., and Bollinger Shipyards, as well as best-of-industry domestic and international teammates to provide a flexible, low-risk warfighting solution. The second LCS type selected by the US Navy is under construction with General Dynamics in Bath, Maine.