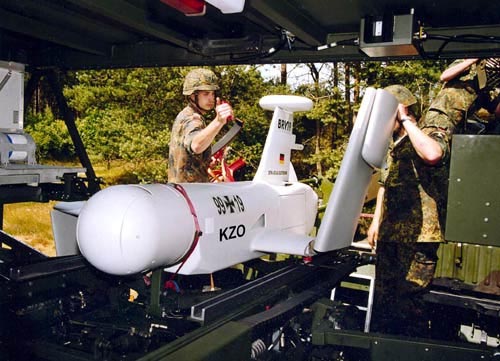 The KZO battlefield reconnaissance system was developed to respond to NATO and specifically German Army requirements for a rapid reaction short range UAV, able to provide high precision targeting and damage assessment for theater operations. The system is designed to operate in day or night and under limited weather conditions. To enable the drone to fly through icing conditions it is equipped with warm-air wing surface deicing system. KZO is launched by a catapult and retrieved by parachute and airbag system. When operating under high winds of up to 50 km/h it can be launched from a container, with booster assist. The KZO drone operates at altitudes of 300 to 3,500 metres. ,Designed to operate under all the climatic environments encountered in Europe, KZO is equipped with a de-icing system, enabling deployment in virtually all weathers. Even under conditions of heavy electromagnetic interference, it can transmit target information back to base at ranges of over 100 kilometres. The KZO can detect stationary and moving targets alike, including their speed and direction of travel; it can remain aloft for over 3.5 hours. KZO has a wingspan of 3.42 metres and a length of 2.26 metres; the fuselage measures a mere 36 centimetres in diameter.

Stealth techniques enable KZO to operate in hostile electromagnetic environment. Acoustic mufflers are used to attenuate engine sound and reduce the exhaust’s thermal signature. KZO operates autonomously over a distance of 100 – 200 km. Data transmission is done via Ku band jam resistant datalink located in a disk-shaped antenna on the tip of the vertical tail fin. The nose mounted payload comprises of a 3x stabilized mid-wave FLIR (8-12micron) and CCD with x8 zoom.

A similar platform, the Taifun attack drone, searches and engages high priority targets. It destroys its target with a hollow-charge warhead. A third configuration – the “Muecke” jamming drone is believed to be in development.

The first of six KZO systems ordered by the Bundeswehr was delivered on November 28, 2005. All systems are expected to be delivered by the end of 2007, comprising sixty drones and twelve ground systems. Rheinmetall is marketing the system under cooperation with Teledyne Brown Engineering Inc.