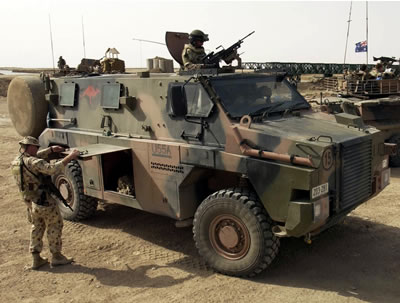 Recent wars, particularly the war in Iraq and the continued hostilities in South Lebanon, Gaza and the West Bank raised the army’s concerns about the vulnerability of utility and wheeled combat vehicles. While sufficient bulletproof protection is available with most up-armored vehicles, counter-mine and particularly counter-IED remain an issue, as both solutions require significant weight increase, which cannot be met with common light platforms.

RPG protection is even more problematic, as, lacking the availability of proven active protection systems, current countermeasures require the use of explosive reactive armor (ERA), which is not suitable for “thin skin” armored vehicles. The latest models of ERA, comprising low-burning or insensitive explosives are more suitable for lightweight platforms such as armored trucks and, in fact, preliminary designs are already in development for armored trucks, to be used as heavy troop carriers or armored infantry carriers, optimized for urban warfare.

Several types of mine-protected armored trucks are in service. Some of these designs are based on commercial chassis, including those manufactured by Ford International and Unimog, trading most of their payload with an armored hull, leaving enough capacity to accommodate the crew, troops and mission payload (usually, around two tons). Most vehicles are utilizing a monocoque V shaped armored hull to with blast mitigating single or double floor, protecting against mine blast and bottom or roadside IEDs.

Typical examples include Force Protection Cougar, BAE Systems RG-31, Australian Bushmaster – all three are currently are in service with coalition forces in Iraq and Afghanistan. Similar designs are used in the South African Casspir, Indian OFB Trojan and the Israeli Zeev (Wolf), which recently entered operational service with the 900th Infantry Brigade (urban warfare specialist). New vehicles currently undergoing various phases of development include the Sand-Cat, from Plasan Sasa, Golan from RAFAEL and PVI, the RG-33L from BAE Systems, and the WildCat, currently under development at IMI. Another design is the Oryx, from International Trucks and Engines. 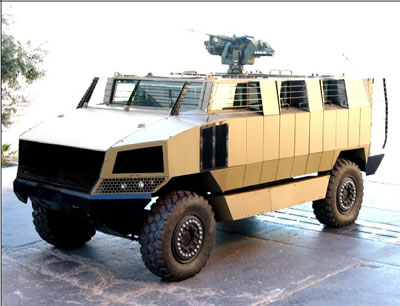