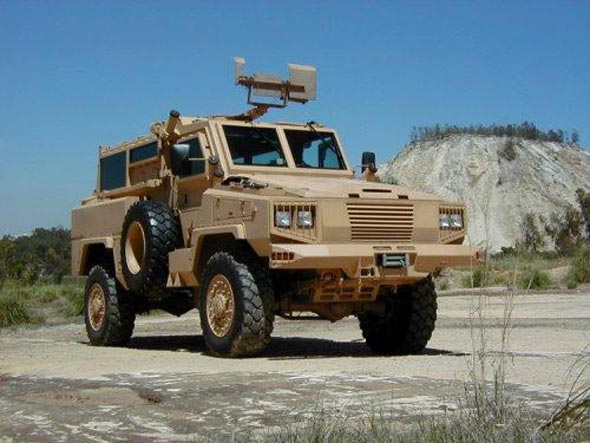 With a combat weight of 8,400 kg., the RG-31 MK3 4×4 Mine Protected APC is built from an all-steel welded armor monocoque hull, typical of South African mine protected vehicles, providing excellent small-arms and mine blast protection as well as small arms fire. The vehicle accommodates a crew of 10 including the driver. Dismounting is provided via a large rear door and two front doors. A different version, the RG-31M features a military wiring harness, central tire inflation and several other new characteristics. This Vehicle has a crew of 5.

RG-31 is currently in service with US Army Task Force Pathfinder attached to the 82nd Airborne Division in Iraq. It is also used with Explosive Ordinance Disposal units of the US Marine Corps, assisting location and neutralizing IED’s. Procurement of 148 additional vehicles, under a $97 million contract was announced in February 2005.

In November 2005 the Canadian government contracted General Dynamics Land Systems Canada (GDLS-C) to supply 50 RG-31 Mine Protected Vehicles with an option for 25 additional vehicles under a CAD $60.3 million (US $51.3 million) order (more info on Defense Industry Daily). An option for the procurement of 25 additional vehicles was exercised May 31st, 2006, at a cost of Follow on order (CAD $31 million, US$ 28 million). The Canadian Armored Patrol Vehicle (APV) also known as Nyala incorporates a Kongsberg Protector M151 Remote Weapon Station, and is equipped with a day and night sighting system, which allows the operator to fire the weapon while remaining protected within the vehicle. It also has an enhanced IED protection. The vehicles will be manufactured by BAE Land Systems OMC of South Africa, while GDLS-C will provide ongoing support. The vehicles were delivered early 2006 replacing some of the lightly armored G-Wagons used by the Canadian forces in Afghanistan in patrol duties. The Canadian Army tested the RG-31s deploying three RG-31 vehicles, as part of its contribution to the International Security Assistance Force in Afghanistan. RG-31s have been extensively used with NATO forces in the former Yugoslavia and by United Nations (UN) forces in Lebanon, Georgia, Syria, Bosnia and Herzegovina, and Kosovo and by US forces in Iraq.

In October 2006 the US Army awarded US$27 million to Dynamics Land Systems- Canada will produce 60 RG-31 Mk5 Mine Protected Vehicles, to be manufactured in South Africa by BAE Land Systems OMC. The vehicles will be delivered within 4 – 6 months. In November 2006 this order was increased to a total of 94 vehicles. In January 2007 GDLS Canada received an additional US Army order for 169 vehicles, to be delivered over six months starting June 2007. The USD$76.5 million contract includes an option for additional nine additional vehicles. On January 2007 BAE Systems and GDLS Canada received orders for four test vehicles for evaluation for the Joint Army/Navy/Marines Mine-Resistant Ambush Protected (MRAP) vehicle program. In February 2007 the company received production orders worth $11 million for 10 Category I and 10 Category II MRAP vehicles.

Vehicles operating in Iraq and Afghanistan will receive independent suspensions, improving their capability to operate in rough roads and off-road. In July 2009 BAE Systems will also upgrade about 300 RG-31s Category I MRAPs with independent suspensions. These vehicles are operated by the US Special Operations Command, under a $95 million program awarded later in July 2009. 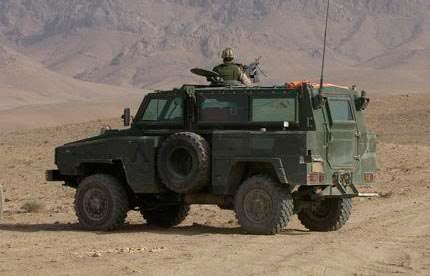 At DSEi 2007 BAE Systems Land Systems OMC of South Africa displayed the latest version of the RG31 Mk6. The vehicle respresents BAE system’s proposed platform for the MPPV program. Mk6 retains the level of mine protection provided by its predecessors, while adding additional protection against Improvised Explosive Devices (IED). The internal volume and payload capacity were increased by the use of a wider hull and an increase of gross vehicle weight (GVW) to 17 tons.

Six Canadian soldiers and an Afghan interpreter were killed Wednesday as their RG-31 armored vehicle was hit by a RoadSide Improvised Explosive device (RSIED) as they were returning form a mission, about 20 km south west of Kandahar in Southern Afghanistan. According to theEdmontonsun.com, Canadian soldiers in Afghanistan have long regarded the four-wheeled armored truck as the ultimate protection against such attacks. Until the latest attack, troops riding in the vehicle had often survived gunfire and roadside blasts with minor or no injuries. However, experts are questioning its ability to withstand more substantial threats. Until this fatal incident RG-31s demonstrated a high level of survivability against typical threats encountered in Iraq and Afghanistan. The vehicle is operated by US and Canadian forces. Four Canadian soldiers credited the Nyala RG-31 with saving their lives in a suicide attack in September 06. The vehicle was damaged, but the soldiers inside it were unscathed. However, a month later, the Canadians suffered the first fatality when one of the vehicles was penetrated killing the gunner.