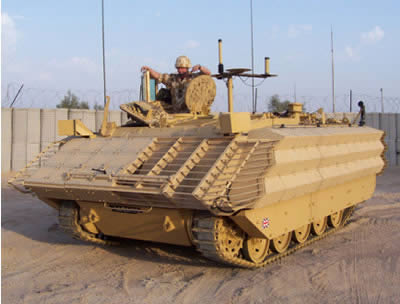 New armor kits have been fitted to the newly modernized British FV-430 Mk3 Bulldog Armored Personnel Carriers (APC) based at Basra, Iraq. In the recent months, the modified APC went through user trials in the UK and the Middle East which confirmed their reliability and endurance.

In the recent months, 50 APCs received a new engine and transmission which introduced better performance, much improved turning capability (Bulldog can now turn around within its own length) and improving more comfortable driving, resulting in less driver fatigue. The new add-on armor provides improved protection against a wide range of threats, bringing it up to the same level of the FV-510 Warrior. Other improvements include air conditioning. The armor package, developed by RAFAEL was first introduced in September 2005 at the DSEi exhibition in London. It uses the latest-generation insensitive reactive armor package on the front and sides, providing protection against a variety of anti-tank weapons, including the widely deployed RPG-7 rocket propelled grenade launcher. In addition, the new appliqué armor provides protection against kinetic energy attack, high-speed artillery and roadside bomb fragments.

Initial deliveries of the new Bulldogs went to British Army units located at Basra. Over the next six months, more deliveries will be made to operations in Iraq as well as Afghanistan. The MOD plans to process up to 500 vehicles with these modifications.