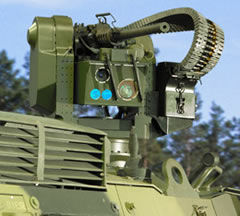 Armored vehicles at DSEi 07: Saab introduced its latest remotely controlled weapon station called ‘Trackfire’, being developed with private funding since 2004. Sofar only two systems were built and used for testing and demonstration. Originally designed for both land-based and maritime conditions Trackfire can be used on both armored vehicles and naval vessels. At a net weight of 136 kg, Trackfire compares with current medium-weight systems, designed for medium and lightweight automatic weapons.

The system offers a stabilized weapon mount and stabilized optronics, and automatic search and track functions supporting surveillance and target acquisition tasks. Trackfire provides the crew full under-armor operability, including the ability to reload the weapon under armor. The system can be fielded with appliqué armor protection, different optronic packages, and link to on board or remote battle management systems (BMS) or sensor packages. By integrating Trackfire with a Defensive Aids Suite – such as laser and/or acoustic gunshot detectors, the vehicle can provide even quicker response to close-in threats, be it threats against the vehicle or threats against dismounted troops.

Pressing forward with marketing initiatives in all of the strategic markets, Kongsberg Defence and Aerospace announced a teaming agreement with Thales UK, to market and Norway’s Kongsberg Defence and Aerospace have signed a teaming agreement enabling Thales locally produce the Protector remote weapon station for the domestic market. Sofar the only weapon station used by the British Army was the Enforcer, a version of RAFAEL’s Samson RCWS produced under license in the UK by Selex.

At DSEi 07 RAFAEL displayed its expanded family of Samson remotely controlled weapon stations, introducing the ‘Junior’ – lightweight remotely controlled weapon station, designed for installation on light armored vehicles and tanks, where weight and space restrictions limit the use of other systems. Samson Jr. comes at a net weight (unloaded) of about 80-110 kg. (depending on configuration). It is designed to mount 5.56mm or 7.62 mm weapons, such as the M249 and M240 machine guns, offering improved close-in protection and situational awareness. Samson JR is currently evaluated by the IDF for use as a loader’s operated weapon on Merkava Mk 4 tanks. The basic system is not stabilized, but RAFAEL offers the systems with optional enhancements and optronics including stabilization, fire control system, long range observation and laser rangefinder.

With the growing concern of the effects of blast caused by mine and IED attacks, manufacturers and armed forces are fielding advanced blast-protected seats to protect troops riding in those armored protected vehicles. Seat providers are coming from different disciplines, including the automotive safety (such as Autoflug, specializing in seat belt systems), Plasan Sasa (an armor specialist) and BAE Systems (vehicle manufacturer and armor specialist). At DSEi 07, Exmoor Trim Company launched the Ballista-Tek range of armored seats, combining steel and aramid Kevlar, used for blast and spall protection. An alternative design uses molded Dyneema sections protecting against blast, fragments and small arms (by the armored seat back).

The Dynamic seat developed by Autoflug uses a harness suspending the crew
member without rigid connection to the floor or walls, therefore eliminating the potential transfer of violent shockwaves during a vertical (under belly) or lateral (roadside bomb) explosion. The seat was qualified for the Leopard 2A6 and M-1A1 tanks, for which 600 M1A1 have been ordered by the US Army. A different design called Type-400 was developed by Autoflug for Armored Personnel Carriers. This seat also protects against mines and IEDs using a five-point harness fitted with quick-release buckle allowing rapid vehicle exit. (read more about safety blast protected seats in an upcoming Defense-Update article).