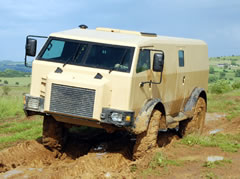 Armored vehicles at DSEi 07: Following the introduction of the heavily protected Mastiff armored vehicles, the British MOD plans to field, by 2009, 180 additional medium protected patrol vehicles (MPPV) supporting troop transportation, convoys and patrols. Sofar, the Army is using two versions of armored patrol vehicles – the Cougar based Mastiff 6×6 heavy truck, produced in the US by Force Protection International and the light armored 6×6 truck called Vector, produced by BAE System’s subsidiary Pinzgauer. The MoD has not yet committed budget for the MPPV procurement, as most of the immediately available funding has been allocated for the second order of 140 Mastiff vehicles announced in October 2007.

The Minimum requirements for the MPPV call for a wheeled vehicle to operate on road and on rough tracks in urban, semi-urban and rural environments. It should also have a maximum weight of 14 tons, be capable of carrying up to seven troops and provide protection against ballistic, mine, fragmentation and blast threats. Vehicles are expected to mount Bowman radios, Counter-IED jammers, specialist armor and weapon mounts, including protected gunner positions or remotely operated weapon stations.

Several candidates for the program displayed or discussed their hardware at DSEi 07. One of these was QinetiQ, teamed with specialist vehicle contractor MacNeillie & Son to offer a vehicle based on MacNeillie’s Military Armored carrier System (MACS) design. A different proposal based on the all-composite CAVCAT armored vehicle was presented by NP Armour Systems.

MacNeillie developed the MACS to be adaptable for various military applications weighing 9.5 to 14 tons. The vehicle design started from a ‘clean sheet’ and matured into a prototype within a few months. The vehicle is based on a Mercedes-Benz Unimog commercial off-the-shelf (COTS) high mobility 4×4 powertrain, running gear and components. The basic design uses monocoque armored body shell made of high grade steel, which can be upgraded to accommodate higher protection levels, including appliqué armor, v-shaped hull and wheel arches, to mitigate IED threats. Despite the weight increase derived by the higher protection level, the basic vehicle’s width is maintained within the track, to allow stand-off protection (such as slat armor) to be carried without excessive overhang.

Based on a standard Iveco medium truck chassis which has been in military service for the past 15 years, CavCat uses NP’s CAMAC all-composite armor solution which was first use with the armored Landrover Snatch using the CAV100 suite. CAMAC is designed as an all-composite bulletproof box, offering a high level of protection and structural strength at relatively low weight. The CAMAC provides a modular monocoque construction providing optimal ballistic protection and strength to carry structural loads. Large scale armor components made of laminated composite are molded and bonded together to form the hull, minimizing joint lines and facilitating a stronger, more repellant surface.

BAE Systems Land Systems OMC of South Africa displayed at DSEi the latest version of the RG31 Mk6. The vehicle respresents BAE system’s proposed platform for the MPPV program. Mk6 retains the level of mine protection provided by its predecessors, while adding additional protection against Improvised Explosive Devices (IED). The internal volume and payload capacity were increased by the use of a wider hull and an increase of gross vehicle weight (GVW) to 17 tons.

Thales Australia displayed the Bushmaster armored infantry carrier, currently in use by the Australian and Dutch forces. The standard fit for these vehicles include air conditioning, remotely controlled weapon station and blast protected seats. The vehicle on display at DSEi included several enhancements, such as the new CROWS weapon station from Kongsberg, a series of side and rear looking cameras and laser warning devices providing 360 degrees situational awareness, an acoustic gunshot detection system and additional protection. Bushmaster is one of the vehicles proposed for the British MPPV program. Thales Australia also offers a flat-bed version, configured with an armored cab accommodating three soldiers (including the driver). It can carry a payload of four tons and is designed for a gross vehicle weight of 15 tons.

One of the newcomers at DSEi 07 was the Grizzly from the US company Blackwater. Originally developed to meet the company’s requirements for secure transportation in high threat areas. The vehicle uses a unique ‘diamond hull’ design that consists of a V shaped hull and sloped walls, offering protection against both roadside bomb and under-belly attacks. The vehicle’s armor is made primarily of layered steel plates, combined with air gaps and layered composites to mitigate blast and behind-armor effect.