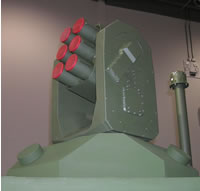 Armored vehicles at DSEi 07: DSEi 07 proved a fertile ground for active protection systems (APS) manufacturers. At least three products were on display, more discussed unofficially by exhibitors and developers. The enthusiasm was motivated by the British MOD interest in APS for its FRES program – the future family of combat vehicles, expected to field an APS as part of their protection suite.

The AMV installation on display at DSEi used an armor base plate designed to mitigate the blast effect from transferring to the vehicle’s structure. APAM-ADS is claimed to provide close-range, non-fragmental defeat of threats (possibly by blast effect) therefore minimizing collateral damage, facilitating use in a dense urban environment. In the past IBD disclosed few details about the system’s design, including the use of laser triggered blast effect, but the company did not elaborate on the actual kill mechanism of its defensive solution. The AMV on display at DSEi also included the Remotely Operated Driver’s Vision Enhancer (RODVE2-D), a compact, steerable, panoramic, thermal imager for the driver developed by Thales Canada.

Another APS on display at DSEi is the LEDS 150 from Avitronics, the South African subsidiary of saab. LEDS is a family of countermeasures designed for the protection of land combat vehicles. Earlier versions of the system were limited to ‘signature-management’ and ‘soft kill’, while the more recent configurations, currently in development are added with ‘hard kill’ options. According to Cobus van der Merwe, senior business development executive with Saab Avitronics, all three capabilities will become an integral part of the protected vehicle, providing hemi-spherical, full spectrum active protection. The system displayed at DSEi 07 on the Piranha III will be tested in Switzerland in December 07. Next year the system is scheduled for evaluation by the US Army, under its Foreign Comparative Test Program. The active protection LEDS is proposed in three versions. Saab expects LEDS 150, the third level, to become operational on Piranha platforms from mid 2009. LEDS 150 has been designed to defeat rocket propelled grenades and antitank guided missiles (ATGM). The system uses an advanced sensor package associated with two High Speed Direction Launchers (HSDL) , loaded with six ‘Mongoose’ hard kill projectiles each. The system has already demonstrated the capability to defeat 105mm tank rounds and RPG-7 (Rocket Propelled Grenades). A more ambitious system, designated LEDS 200 is in development, to defeat multi-band threats while LEDS 300 will be capable to defeat kinetic energy projectiles and anti-tank missiles at longer ranges.

RAFAEL unveiled at DSEi 07 a lightweight version of the Trophy active protection system, designed for light and medium armored vehicles. It was displayed at the RAFAEL stand mounted on the Golan armored vehicle. Trophy Light is smaller than the original Trophy, designed to protect main battle tanks, weighing about half the Trophy’s weight. The system comprises four flat radar antennae located around the vehicle, designed to cover 360 degrees. The system uses one or two launchers, firing the interceptor projectiles to defeat incoming threats at close range. As with other APS, the active defensive capability is only an element of the vehicle’s entire protective envelope, since such systems are designed to intercept threats (such as RPGs) at a stand-off range, eliminating their most lethal shaped charge penetration capability while the vehicle’s passive armor is required to defeat residual impact by inert threats. At DSEi 07 the Golan vehicle was demonstrated with a new type of hybrid armor called M-TAPS, developed by RAFAEL to offer effective protection from IEDs, RPGs and EFPs. The new armor uses a combination of passive inert and insensitive energetic materials, to provide passive and reactive protection from all types of threats, while Trophy Light could augment these elements by enhancing defensive capability against tandem shaped charge threats.