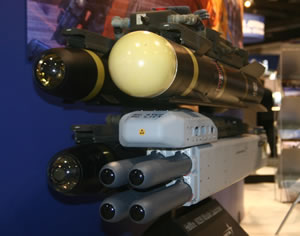 Missiles at DSEi 07: Among the missile programs at DSEi 07, Defense Update picked some of the most recent developments in the air/ground and surface-to-air domains. MBDA presented a brief introduction of its future missile development, particularly the Common Anti-Air Modular Missile (CAMM). Advanced air/ground missiles are also being studied, in an effort to provide air forces with more flexible and adaptive effects. Two missiles are currently being studied – the Selective Precision Effects At Range (SPEAR) and Multi-Role Combat Missile (MRCM).

The UK Ministry of Defense is funding an MBDA study of future family of  ‘anti-air’ weapons known as the Common Anti-Air Modular Missile (CAMM). The new weapon will utilize the airframe and some of the components used with the Advanced Short-Range Air-to-Air Missile (ASRAAM) and introduce advanced  and enhanced capabilities for aircraft currently deploying this short range, heat seeking missile. But CAMM will be aimed at more applications than AAM  enhancements. By meeting tri-service requirements, the new missile could be  used to replace existing weapons such as the land-based Rapier point-defense missile system, and naval Sea Wolf missile. CAMM is expected to be available for deployment from around 2018 onward, coinciding with the planned retirement of the SeaWolf system. Rapier systems are scheduled for retirement by 2020.

MBDA is also pursuing another precision attack concept known as Selective Precision Effects At Range (SPEAR), a UK Royal Air Force’s (RAF) requirement for the ability to engage mobile relocateable and fixed targets at long stand-off ranges with extreme precision. Initial deployment of network-enabled SPEAR family of missiles is expected around 2015 or later, depending on aircraft platform. SPEAR places much emphasis to enable the air force to maintain operational capability even under restricting, ever changing rules of engagement, associated with asymmetric warfare. SPEAR is expected to operate in day, night and in all weather conditions, carried by aircraft including the Tornado GR4, Typhoon and F-35 Lightning II. Target sets attacked by SPEAR munitions could include semi-hardened buildings such as command posts, mobile air defense units and moving targets, including small 4×4 and light armored vehicles. An important capability required with SPEAR is its ability to discriminate between a moving ‘target’, designated and confirmed by the user, and ‘non targets’ – other moving vehicles similar in shape and size. SPEAR will be very flexible in its targeting which can take place from the platform itself or from a third party, such as a wingman or operator on the ground.

A next generation missile currently designated Multi-Role Combat Missile (MRCM) is also under development as part of a tri-national initiative involving the UK, France and Sweden. The program, previously known as European Modular Munition (EMM) pursue the development of next-generation, precision attack weapon to be carried with attack helicopters, small naval crafts and emerging ground based platforms, such as the family of Future Rapid effects Systems vehicles (FRES). The missile will be employed in Line of Sight (LOS) and beyond Line of Sight (BLOS) engagement profiles, providing precision attack capability at short (~6 km), medium (~15 km) and long (>50) km range. At present, the three nations are funding a three year technology demonstration phase that began in 2006. Under this framework, MBDA and Saab Bofors Dynamics are formulating a Joint Systems Architecture Study to be launched during autumn 2007. Subsequently, the program is expected to enter development starting 2010. If progress is made according to plans, initial fielding of MRCM product could be as early as by 2014.

High precision lethal effects at much shorter range are enabled by laser guided weapons such as Lockheed martin’s new Direct Attack Guided Rocket (DAGR). The company introduced a quad-launcher carrying four DAGR rockets, compatible with the M299 and M310 ‘smart’ launchers currently associated with Hellfire missiles. Lockheed Martin developed the rocket as a private initiative and plans to offer the new system to its Hellfire customers. These 2.75″/70mm rockets are fitted with semi-active laser guidedance offering performance comparable to that of the precision strike laser guided Hellfire II missile. The DAGR guidance kit provides standard rockets, such as the Hydra-70 and CRV-7 with lock-on before launch and lock-on-after-launch and target handoff capability. The guided rocket also offers advanced features, including enhanced built-in test and laser coding setting from the cockpit. Off-axis capability should increase hit probability and expand the engagement envelope in difficult launch positions, providing additional field of view for angle of attack, moving targets and wind corrections.

Lockheed Martin UK INSYS displayed at DSEi 07 the prototype of the British Army’s Lightweight Mobile Artillery Weapon System /Rocket LIMAWS(R) based on a British Supacat 600 series High Mobility Transporter (HMT) specialty vehicle. The company is expected to build four pre-production vehicles under a forthcoming MOD demonstration and manufacturing contract. The vehicle will be able to carry and launch the M270B1 upgraded MLRS and Guided MLRS (GMLRS) weapons. Each LIMAWS(R) will carry six rockets or a single ATACMS missile, a weapon the British Army is expected to field in the future. It will have the ability to ripple fire GMLRS at up to six independent targets, from level or sloping ground. A loaded LIMAWS(R) will fit internally in a C-130 Hercules, or be lifted by sling load by a CH-47 Chinook, enabling MLRS firepower an unprecedented tactical mobility into areas previously inaccessible to heavy support systems.

Back to the air defense domain, another missile in development is the Starstreak II from Thales Air Defence. The company introduced a new version of the Starstreak surface-to-air missile, called Starstreak II. The new version has an extended range of about 7 km, and increased altitude. The missile’s laser beam guidance has been improved to facilitate interception of smaller targets, including helicopters, low-flying aircraft and UAVs. It can also be employed in direct attack against light armored vehicles. The new missile could be operating from Thales’ multi-mission system (MMS), a vehicle borne multiple launcher system currently deployed with British and South-African armies. Beside air defense weapons, the launchers are configured to carry a number of alternative weapons, including Hellfire, Spike, Javelin or Ingwe ATGMs or a combination of different missiles. 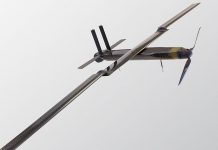