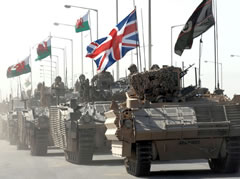 Last Sunday the British forces in Iraq transferred security authority over Basra to the Iraqi Army. Unfortunately, the only thing which took place during the transfer ceremony was its orderly fashion. What the British leave behind is one of the worst security nightmares in that troubled land, which could well end up in disaster. The turnover marks the end of Britain’s nearly five-year-old principal mission in southern Iraq, a region the British had previously occupied during World War II, to prevent the oil-rich country from siding with the Germans. Basra’s ports and oil fields generate more than three-quarters of Iraq’s revenue today. Retired Colonel Tim Collins, who led the victorious Royal Irish Regiment into Basrah back in 2003, sadly compared Sunday’s pull-out to the US retreat from Vietnam: “the Army was never given a clear mission. If anything this has been a political failure”, the colonel said.

The real event of British handover had already happened last September, when a lone bugler from 4th Battalion The Rifles battle group rang out at Basra Palace Base, shortly before 1am local time on 2nd September 2007, sounding ‘the advance’ for the last British convoy to leave the base, virtually clearing all British troops from the city.
As the huge armored column, led by Challenger 2 tanks and stretching back a mile and half, trundled out of the compound – Saddam’s former bastion, close to the Shatt al-Arab waterway – RAF helicopters circled overhead. The withdrawal left the city largely in the hands of warring Shia militias, with the bloody prospect of more killings and kidnappings as they battle for power.

In realistic terms, nothing could disguise the fact that the British withdrawal was, in reality, a retreat from the battlezone, without its mission having been accomplished. Indeed, “Operation Blenheim” was the code name for the transfer of 550 troops from the last base in the city to the relative safety of the airport. Despite the heroism of the British soldiers, many regarded it as a humiliating withdrawal. The pullout came after four and a half years – and the deaths of 174 brave servicemen and women – tackling the hopeless task of trying to bring peace to Iraq’s second largest city. It turned out to be a clear “Mission Impossible”, bungled, as so often happens these days, by irresponsible politicians.

Although nearly a thousand miles to the West, many Israeli soldiers were reminded of a similar fiasco, when in May 2000 they were also forced out of South Lebanon, in a hasty retreat, by political shortsightedness, which brought about chaos and destruction inside Israel and the Second Lebanon War last year.

No one in Basrah, whether Brit’ or Iraqi, will deny that the city and the province that the British are handing over, is plagued by violence between militias and criminal gangs, all of then seeking for power in this highly strategic city. The only clear victors in Basra’s political scene have been the gangster politics of al-Sadr Jaish al-Mahdi and the Badr Organization that virtually have taken over police and politics in the province. In fact a senior British army commander in southeast Iraq has admitted, that U.S. forces might be needed in future Basra in emergencies after Britain will finally reduce and ship out its remaining contingent, planned early next year.

The Americans are especially concerned with the prospect of Basrah Province turning into a chaotic region. And they have all reason for this fear: Not only is Basra is the sole maritime port in Iraq, but also the main coalition military supply route from Kuwait to Baghdad, running through that province. Even if American forces will redeploy to Basrah Province, they will, undoubtedly face difficulties. As U.S. forces have not been directly involved in that region, they will find it extremely hard to fill in the void created by the Brit’s withdrawal, when an emergency will arise, for example a growing involvement from Iran, to threaten the vital lines of communications, from Kuweit into Northern Iraq.

In fact, the strategic importance of Basrah Province cannot be overestimated: Basra governorate is the only region enjoying maritime access into Iraq, making it the country’s de-facto economic capital and a lucrative prize for local political actors, not to mention Iran. Sandwiched between Iran and the Gulf monarchies, at the intersection of the Arab and Persian worlds, the region is strategically one of the world’s major key points, especially, as long as US military presence in Iraq is maintained.

US General Jack Keane, who is close to the White House and was the architect of the American troop “surge” in Baghdad, earlier this year, said the British policy was helping to turn Basra into a city of “gangland warfare”. His remarks represented the first public questioning of British strategy by a senior US military official since Mr Gordon Brown became British Prime Minister at the end of last June. But the last thing the Bush Administration would want to do at a time, when it faces growing domestic pressure to bring home troops, is sending the already overstretched troops into this Shi’ite sizzling powder keg. No wonder that the British withdrawal would be regarded in Washington as little short of betrayal.

The full scale of the chaos left behind by British forces in Basra City, was revealed only days ago, as the city’s police chief described a province in the grip of well-armed militias strong enough to overpower security forces and brutal enough to behead women, considered not sufficiently Islamic. Major General Jalil Khalaf, the new Iraqi police commander, said the occupation had left him with a situation close to mayhem. “They left me militia, they left me gangsters, and they left me all the troubles in the world “. Khalaf, who has already survived 20 assassination attempts since he became police chief six months ago, must certainly know what he is talking about. Only last October, the main police station in the city centre was over-run by Mahdi Army militiamen, chasing his officers out of the compound. Order was only restored by British intervention.

It does not need much imagination what will be in store, now that the “peace-makers” have gone! To further illustrate this point: Some 27 Iraqis died and 150 were wounded only seven days before the handover ceremony in Basrah, when three car bombs ripped through Amara, the capital of Maysan province, which the British Army has left last April and local authorities have taken over security responsibility from the British military. Soon after the last British soldier left, rival Shiite groups have been battling for control of oil and power. For years, British presence has been the buffer holding back these factions from sparking an all-out Shia-on-Shia militia war in Basra. Now Basra is already in the midst of a power struggle among Shiite parties. The Islamic Supreme Council of Iraq (ISCI) party and its Iran-friendly affiliate, Badr, are competing with the Fadhila party, which holds the governorship of the province, and the movement of radical cleric Moqtada al-Sadr, whose Mahdi Army militia is regarded as the most potent force on the ground. The fledgling police force and most government institutions in the province have been divided by these forces into warring fiefdoms. Iraqi officials claim that out of the 17,000 policemen in Basra, about 14,000 are beholden to militias and many even loyal to the Iranian secret service.

A major factor in ant future instability in Basrah Province and for all purposes, Southern Iraq as a whole, will be instigated from Tehran, which was only waiting for the British to withdraw and leave chaos behind. For several years Iranian intelligence has been preparing for complete dominance of southern Iraq by penetrating Basra’s security network and political parties. Iran has found it easy to build alliances with fellow Shiites who form the majority in southern Iraq. The Iranian-backed insurgents have found willing recruits among the city’s jobless. “The Iranians, in fact, have virtually taken over all of south Iraq,” said a senior tribal leader from the south who spoke on condition of anonymity because he feared for his life. “Their influence is everywhere, from top to bottom.”

With the border from Iran only short distance from outside Basrah city, one should keep a wary eye on Khuzestan, which is only a stone’s throw across the Shat-al-Arab waterway. The clerics in Tehran have always regarded Britain’s presence as transient and are well prepared for their departure- for the next round of an almost inevitable conflict.

Over the years, Iranian Islamic Revolutionary Guards (IRGC) elite Qods Force have infiltrated the Iraqi security forces in Basra by trained militias. Captured Iranian documents originated in the Iranian regime’s Fajr Garrison in Al-Ahwaz in Khuzestan indicate that Tehran is already employing about 40,000 paid agents inside Iraq. The importance of Khuzestan as a spring-board for asserting Iranian control over provinces such as Basra, has thus become a major springboard for any future operations in southern Iraq. The Iranian regime has long been using Khuzestan as a base for launching insurgency operations in Iraq and it seems only logic that these will eventually intensify, now that the British withdrawal is creating a dangerous void in that volatile region.

Intelligence reports indicate that Fajr Garrison, near the Arab-populated city of Ahwaz, is the main headquarters of the Islamic Revolutionary Guards Corps (IRGC) in southern Iran. It hosts the IRGC’s Quds Force, which runs a vast underground network of agents and insurgents inside Iraq. Under such a challenging foray, which may well be risky, but also promising lucrative results, Iran’s first objective implementing its aim, would be controlling the strategic Shat-al-Arab waterway and next, Al Basrah province, which not only dominates all access routes in that region, but would place the US led coalition forces in Iraq in dangerous jeopardy, by virtually threatening their vital logistical supply life-line into central Iraq. In a recent restricted intelligence report, which was circulating throughout Mid- East, Israeli academic experts estimated that, while world attention is focusing on Iran’s nuclear ambitions and Iran President Mahmoud Ahmadinejad’s fierce rhetoric, the Islamic Revolutionary Guards Corps were quietly destabilizing southern Iraq, unhinging British military control of Al-Basrah being their first objective, which has now, to their surprise materialized much sooner than expected. 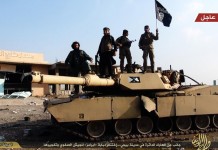