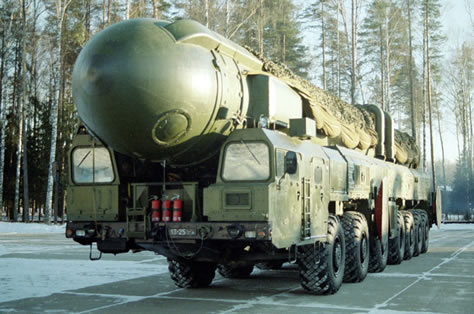 The Topol (RM-12 / SS-25) was first deployed by the Russian military in 1997, and is operated since by the Teikovo division under control of the Strategic Missile Forces in the Ivanovo region, northeast of Moscow. 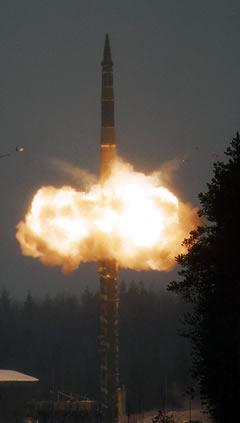 The Topol regiments currently operate 48 missiles based in underground silos. Two more will be deployed in 2008. In 2007 the regiment received its first mobile Topol-M, operated by the 2nd battalion. The unit is scheduled to receive additional mobile missiles in 2008.

Topol-M missiles are expected to form the core of Russia’s strategic missile force. Toppol-M has a range of about 11,000 kms (7,000 miles), and is claimed to be immune to missile defenses, using terminal phase maneuvering, countermeasures and decoys. It is also claimed to be resistant to radiation (including laser), electromagnetic pulse and nuclear blast. Gen. Nikolai Solovtsov, SMF commander, earlier said that Topol-M systems would be equipped with multiple independently targetable reentry vehicles (MIRV) in the next two or three years.

The mobile Topol-M missiles are less vulnerable to the technical reconnaissance of an enemy. Russian officials said that production of mobile missile will continue over the next few years. Topol-M missiles are expected to form the core of Russia’s strategic missile force.

In a parallel move, Russian Navy submarines will get the naval version known as RSM-56 Bulava-M, (NATO Reporting name SS-NX-30) currently undergoing flight testing. The first submarine of the Borei series, Yury Dolgoruky, is expected to join the Navy in 2008. Russia has also made a decision to start serial production of the Bulava-M missile, following a successful test launch in late June 2007.