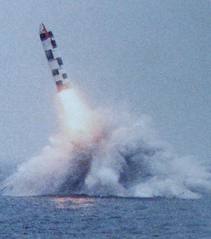 Bulava M is considered a sub-launched version of the Topol. The missile is being developed by the Moscow-based Heat Technology Institute, which ALSO designed the ground-based Topol-M (SS-27). Both missiles are considered to form the core of the Russian nuclear deterrent forces until 2040, allowing Russia to maintain nuclear parity with its nuclear opponents. Bulava M has a range of 6,200 (8600 km) miles and is designed to carry six individually targeted reentry vehicles equipped with nuclear warheads. The missile is fitted with ten maneuverable independent reentry warheads, each loaded with 550 kT yield nuclear warhead. Each Borei class submarine can carry 12 missiles. The converted Typhoon class submarine Dmitry Donskoi carries ten missiles.


Repeating failures have drawn much scrutiny and attention to the Bulava, but the Russian Navy insists there is no alternative to the missile. The missile started engine flight tests from ground launch pads in 2004. The first two sea launches in September and December 2005 were successful. Two additional launches failed, in September and October 2006. Russian Navy experienced seven failures with these submarine launched missiles. Two failures happened during Northern Fleet maneuvers, attended by President Vladimir Putin in February 2004. One missile failed to blast off from a submarine and a day later, another exploded shortly after launch. In July 2009 a test flight failed after the missile’s first stage malfunctioned. Annother test flight in December 2009) terminated over the White Sea in the Arctic Circle, short of the designated target. According to official reports from Moscow, the first two stages functioned smoothly, but the flight faltered at the third stage due to a technical failure that caused instability in the third stage engines.

Official investigation of the recent failure of the Russian Bulava has established that the missile failure was caused by a design flaw, rather than a faulty component. Earlier official statements cited a number of reasons for the repeated failures of Bulava tests, including faulty components, attempts to replace specific materials with cheaper substitutes and obsolete manufacturing equipment. Of the 12 Bulava missile testes conducted in recent years seven failed and only five determined ‘successful’. Provided the fault can be corrected in time, Russia plans to renew Bulava testing in May-June 2010.

Bulava was scheduled to equip the new Project 955 Borei class submarines, which will replace the older Typhoon class nuclear powered missile subs currently in service. The lead submarine Yury Dolgoruky was scheduled to receive its complement of 12 Bulava missiles around 2008, while two sister ships Alexander Nevsky and Vladimir Monomakh will be completed in 2008 and 2010. Delays in the completion of the SSBM will undoubtedly push back the commissioning of the new submarines. 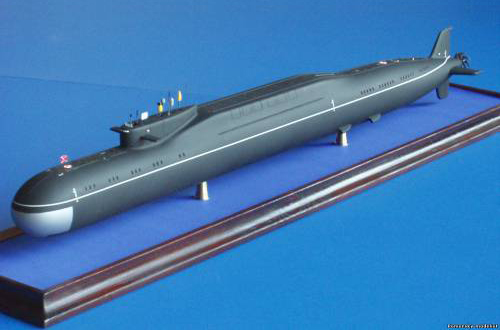