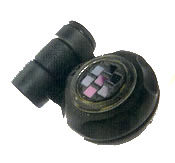 Sniper detection was one of the urgent requirements made by users of Land Warrior systems in Iraq. This capability is now provided with the current Land Warrior system by sending sensor cueing received from vehicle mounted Boomerang systems. QinetiQ and Planning Systems Inc. (PSI) unveiled at AUSA the Ears, an acoustic gunshot localization system designed to protect installations, vehicles and individual soldiers or small units. Packed in a single sensor, the lightweight and compact Ears unit is designed to operate in difficult acoustic environment; requiring only one gunshot to accurately locate snipers in a 360 degree view, using shockwave and muzzle blast signatures, even when in use on a vehicle moving at speeds over 50 mph. In September 2007 Ears was first deployed to several fire bases in Afghanistan. More systems are to be deployed in Iraq during 2008. Some of these models (MM/VM) are already operational and have been used in combat operations since January 2008. The system was recently selected by the U.S. Army Natick Soldier Research, Development & Engineering Center (NSRDEC) for integration into the future force warrior evaluation.

As the modern infantry system is addressing the “Warfighter as a System”, this approach cannot be completed without monitoring the soldier’s vital signs indicating the ‘platform’s status and operational conditions’. Currently in pilot production for military and non military customers, QinetiQ/Foster-Miller’s Watchdog system incorporates a special garment with embedded sensors, which translate the individual’s vital signs into physiologic algorithms defining the wearer’s status – Red Light (significant health or performance perturbation), Yellow Light (modest perturbation) or Green Light (normal) to the remote display. The company is already working on improving the algorithm to provide more detailed condition indications such as heat stress and other health status information, fitness level and individual training prescriptions.

When operating in close combat, infantry units are being supported with organic and non-organic direct support elements, such as helicopters, aircraft, UAVs. In such complex scenarios, Combat Identification (CID) is a critical factor for the warfighter’s safety. Effective CID enables joint forces to employ effects and fire at shorter safety distances, extending the support as close as possible to the close-combat firefight. At Ausa Winter, ICX Photonics unveiled a range of combat identification devices utilizing thermal beacons and markers. The CID operates both as an active signaling device and an interrogation response component for use with infrared vision and targeting systems. The new devices use Microelectromechanical systems (MEMS) technology to create infrared light with emission tuned for visibility in only the desired spectral region. When the MarkerID device is activated, worn on the infantrymen’s uniform, its pulsing infrared can be seen by a thermal viewer or image intensifier at a range of one kilometer. However, when configured for ‘query-and-response operating mode, the device can be set to identify ‘blue’ troops in a fraction of a second, prior to engagement.

Simplicity is the main issue when it comes to warfighter systems. MTC Technologies demonstrated such simplicity with its Parascope, a simple, highly effective off-axis sight viewer which can be used as an ‘urban combat sight’. Parascope allows combatants to engage targets from behind a protective barrier with minimal exposure. The sight is designed to reduce the warfighter vulnerability in close combat situations. The 370 gram (13 oz) device fits on standard Picatinny rail, mount behind the sight. Parascope has a sideways and a rear view ports, enabling the soldier to maintain direct or ‘around the corner’ firing as required. According to sources at MTC, few dozen sights have been deployed with US Marines and government users to Iraq. 40 more are to be delivered soon.