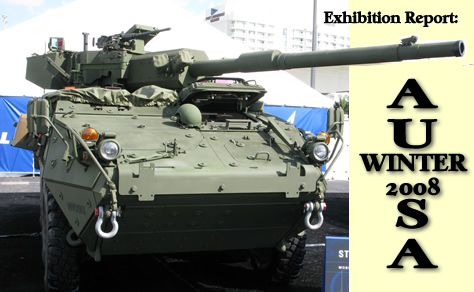 AUSA Winter 2008 convention held at Ft. Lauderdale in February 2008 provided the venue for the second largest land forces exhibition held in the USA in recent months. (Defense Update reported from AUSA 2007 Convention in October 2007). Although the winter event addressed many of the aspects already covered last October, the rapid pace of development and upcoming changes in the Army’s and department of Defense priorities, funding and plans brought many exhibitors to focus on new topics.

One of the most visible changes was the high priority that all defense integrators and vehicle manufacturers are placing on the Joint Light Tactical Vehicle program – a ‘winner takes all’ multi-billion dollar opportunity to be grabbed by a single team in the next decade. While the final decision on the winner design and team is expected only by 2013, industry teams are already in battling to win the technology demonstration and system development phases. (Click here for our JLTV updated report).

While JLTV is making progress, the military continues to spend huge amounts on the procurement of MRAP, despite their limitations (regarding tactical maneuverability and strategic mobility). Another issue realized with current MRAP deployments was the gap in the ability to recovery disabled MRAPs in theater. While the Army has yet to publish a specific requirement for heavy recovery assets to be able to support these beasts, both Oshkosh and BAE Systems are preparing to submit their offers for such vehicles, two of which were on display at AUSA Winter. (Read Defense-Update review of the new recovery vehicles at AUSA Winter 2008)

Another hot issue is the warfighter – new wearable systems are being introduced in growing numbers, following the trend of miniaturization, and empowerment of the ‘combat edge’, as reflected by Special Forces units and the latest ‘Land warrior’ trend. At AUSA Winter we discovered several new systems such as the Watchdog physiological monitoring system, CID, acoustic gunshot locator, multiple radio communications controller and more. (see our dismounted warfighter, land warrior and soldier systems articles)

Much progress is being made with the Army’s Future Combat Systems; Two of the four unmanned systems included in the FCS family of systems are being released as part of ‘Spiral 1’, to support the current force. More systems, including the ground unattended sensors will follow soon and the Non Line of Sight – Cannon (NLOS-C) – the first of eight manned vehicle platforms will roll out of BAE production line this year. (link to FCS family of vehicles article) Progress was made with the lightweight 120 gun associated with another vehicle, as well as with the mortar system, missile etc. At the network level, AUSA Winter provided the opportunity to demonstrate the operability of the Joint Tactical Radio System (JTRS) Network Centric waveform, a critical element in the formation of the overarching future FCS network and the Army’s future Warfighter Information Network – Tactical (WIN-T) networking infrastructure. One of the most critical elements of this network will be Satcom on the Move, an area which attracted much interest from visitors and exhibitors alike. (FCS networking update)

Some of the weapons displayed at AUSA Winter highlighted the continued trend toward measured effects enabling precision attack at extended range. New weapons such as the P44/42 and DAGR, both developed by Lockheed Martin are examples of the two extremes – carrying the effect currently provided by the Hellfire missile to much longer range (P-44/42) or to shorter range, and controlled collateral damage, by the new DGAR guided rocket. New warheads are also offered for the modern missiles, optimizing the weapon to achieve the desired effects against a wide range of threats. New sensors capable of better identifying targets from longer ranges and in difficult conditions, are supporting the weapons providing real-time forensic support needed for rapid targeting and engagement through an ever short sensor-to-shooter process. (Click here for our ‘Weapons for Scalable Response’ article)

Sensors and Electro-Optical (EO) equipment received extensive coverage at AUSA Winter. Advanced vision systems including image intensifiers and thermal vision systems (FLIRS) are providing the warfighter ever better performance. With the market evolving at record pace to realize enhanced and more capable systems, many exhibitors of EO systems underlined their generic technological capabilities, promoting new thermal imaging modules, digital I2 devices and laser augmented imaging which could be integrated into new systems meeting specific customer requirements. Other solutions focused on the uses of imaging resources – recording, storage and retrieval at the lower level, distribution, processing and workflow that creating actionable intelligence by correlating images based on geographic relevance or through time to discover changes or hidden links or meanings. Intelligence is automatically and manually processed from millions of images received continuously from scores of combat cameras and video sensors distributed in the field, as well as from human sources. Means of creating reports, tagging information and processing it to discover hidden meaning and links are the focus of several intelligence application developers that unveiled part of their work at the convention. (see the feature on: Electro-optics, Intelligence and IMINT)

Defense Update continues the coverage of the Army’s Joint Heavy Lift program. This year at AUSA Winter. The Army decided to support three different technologies which are currently pursued by Lockheed Martin, the Boeing-Bell team and Sikorsky. Another program currently in progress is the A-160 Hummingbird, developed by Boeing. The program suffered a setback with the loss of one of the A-160T unmanned vehicles last December, but Boeing assured that the problem did not casue significant delay for the program. (JHL article)