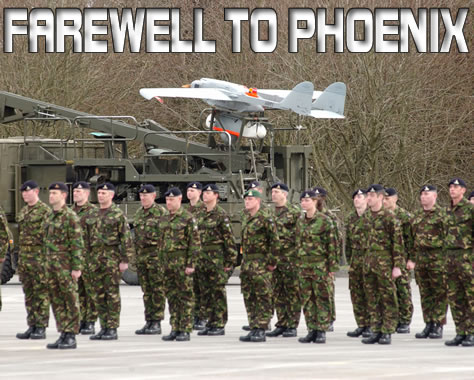 The Phoenix unmanned aerial vehicles is officially withdrawn from active service with the British Army this month. The 32 Regiment Royal Artillery, the army’s tactical unmanned air vehicle (UAV) regiment retired the UAV in an official parade at its barracks on March 20, 2008. The 32 regiment operates two batteries, the 22 (Gibralter) Battery and 57 (Bhurtpore) Battery. These units are currently operating Desert Hawk 3 mini UAVs and larger, more capable Hermes 450, acting as interim replacements for the Watchkeeper UAV, to be fielded by 2010. The Royal Air Force also operates three larger Predator B (Reaper) in Afghanistan.

Originally developed by GEC Avionics (now merged into BAE Systems) Phoenix UAVs were first bought into service in 1999, after 12 years of development and testing, as part of the NATO peacekeeping mission in Kosovo. They participated in Operation Telic (the War In Iraq) and in Afghanistan. 22 Battery was the first and last Battery to operate Phoenix in Iraq. The final operational flight was conducted by Koehler’s Troop in May 2006, at Camp Abu Naji, Al Amarah. The Battery is now training for possible deployment to both Iraq and Afghanistan in April 2009.

22 (Gibralter) Battery RA took the lead role in taking Desert Hawk 3 UAVs and Hermes 450 UAVs into operational service in Iraq last year. The Hermes operators provided new and invaluable support to 1 Mechanised Brigade, accumulating over 3000 flying hours. The Desert Hawk operators deployed all over the British area of operations including Basrah Palace, Maysaan Province, the Iranian border, and often operated with front line infantry units using their own infantry skills to support these units on demanding operations. The detachments flew in excess of 1000 operational Desert Hawk flights across southern Iraq. 22 Battery was the first and last Battery to operate Phoenix in Iraq. The final operational flight was conducted by Koehler’s Troop in May 2006, at Camp Abu Naji, Al Amarah. The Battery is now training for possible deployment to both Iraq and Afghanistan in April 2009.

57 (Bhurtpore) Battery RA deployed to Afghanistan in April 2007 with Desert Hawk, one Mini UAV and Hermes 450, which provided a significant capability increase. Members of the Battery provided UAV imagery directly into the Brigade Headquarters and operated across the whole British area of operations.

The Phoenix unmanned aerial vehicle (UAV) is an all-weather, day or night, real-time surveillance and target acquisition system. Pheonix’s surveillance suite is data-linked to a ground station which, in turn, transmits the intelligence gathered directly to artillery command posts. The Phoenix UAV is almost entirely made from Kevlar, glass fibre, carbon reinforced plastics and Nomex honeycomb; and is powered by a 25hp two stroke flat twin engine. The UAV can be launched within an hour of reaching launch site. Up to 2 UAVs can be controlled from the same ground control station.

The concept of the Phoenix system was to provide a battlefield surveillance and target acquisition capability, to replace the Canadair Midge 501 Drone system, which had been in service with 94 Locating Regt RA in BAOR, and 22 Bty RA in the UK, since 1972.

The Drone system gathered data by flight over pre-planned flight paths using ‘wet film’ EO and IR sensors, resulting in data always being several hours old. Phoenix would provide live video into the GCS, with near real time target acquisition data, and the ability to dynamically re-task in flight.

The Phoenix system was developed by BAE Systems (formerly GEC Avionics), based at Rochester in Kent. The development trials began in 1987 at Lavington Folly on SPTA. Initially the trials were supported by a team of 8 personnel, from HQ DRA and 156 Bty Battery RA, 94 Regt RA. This team supported the technical development of the system and provided the operators for the Launch/Recovery and GCS/GDT detachments.

The original ‘A Model’ airframe was fitted with a crushable dome, the sensor was an “off the shelf” home video camera, and the system was flown using radio control. The system evolved through a series of airframes, the introduction of the GCS and numerous versions of software, until 1995 when the majority of the technical development issues had been overcome.

In 1995 the military support to the trials increased to troop level, when the emphasis of the trials shifted to developing the tactical use of the system, although some technical issues still had yet to be resolved. The manpower for this stage of the trials was provided by 57 Bty RA, 39 Regt RA. This stage lasted until 1997, when the final acceptance tests were completed, and the system was brought into service.