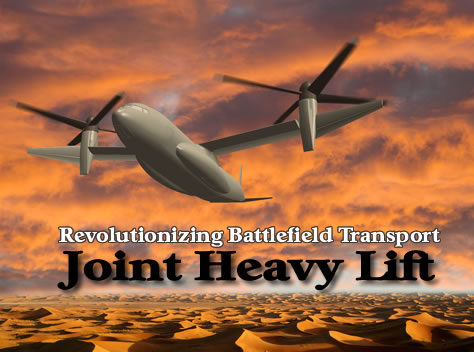 Bell and Boeing are working on a new quad tilt-rotor design for the planned Joint Heavy Lift (JHL) transport aircraft. The design utilizes the ’tilt-rotor’ concept already proven on the CV-22 Osprey, The new aircraft will be capable of operating anywhere in the battlefield, lifting 25-32 ton cargo, representing a Stryker armored infantry carrier, an FCS ground maneuver vehicle or a Marine Corps Light Armored Vehicle (LAV). The aircraft will be able to operate straight from a ship’s deck or forward staging area, cruising at a speed of 275+ knots over 2100 nm unrefuelled, with 19 tons of cargo. Its operating ceiling will be around 25,000 ft, above most air defense and MANPAD threats (an artist concept is shown below).

Another team pursuing JHL is led by Lockheed Martin [NYSE: LMT] which announced teaming with Karem Aircraft Incorporated. The new design will utilize Karem Aircraft’s Optimum Speed Tilt-Rotor (OSTR). This concept is considered one of the three approaches selected by the Department of Defense (DoD)’s Joint Heavy Lift program office to receive a Concept Design and Analysis extension contract. Lockheed Martin’s effort will be led by Lockheed Martin Aeronautics’ Advanced Development Programs organization (The Skunk Works). An artist concept of this design is shown at the top of this page.

The third technology considered by the Army for JHL, is the X2 coaxial rotor system developed by Sikorsky Aircraft. An X2 powered aircraft will be capable of hovering, takeoff and land vertically, maneuver at low speeds, and transition seamlessly from hover to forward flight like a helicopter. In a high-speed configuration, one or more ‘pusher props’ is included in an integrated auxiliary propulsion system to enable high speed with no need to physically reconfigure the aircraft in flight. (A model of the High Speed Lifter is seen in the photo below)