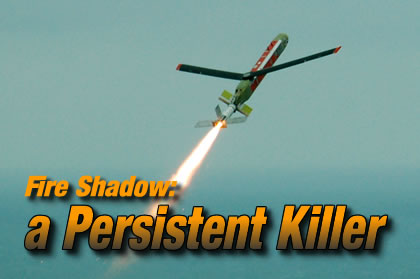 The need for a weapon capable of loitering over the battle area, instantly responding to targets being exposed for very short period time, was identified during an early assessment phase under the UK’s IFPA (Indirect Fire Precision Attack) Assessment Phase 1 (AP1) program was concluded in 2005. Such weapons maintain long persistence over the battle area, maintaining concealed enemy elements, including air defense and surface missiles units at risk, when being prepared for launch. The second phase of the IFPA Assessment Program (AP2) is nearing conclusion, as it is re-assessing the planned mix of munitions against latest Defense Planning assumptions and scenarios informing the balance of investment between the currently envisaged mix of 155mm munitions, rockets and Loitering Munitions. MBDA and QinetiQ are part of the Ministry of Defence’s Joint Integrated Program Team (IPT), expected to deliver the final results soon. 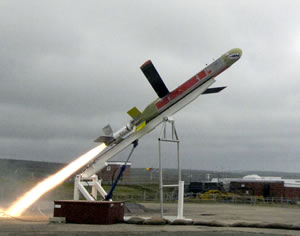 
Officially launched at the Farnborough Air Show in July 2008, the loitering munition assessment phase is part of the overarching ‘Team Complex Weapons’ (Team CW) joint industry -MoD development roadmap. The assessment phase of the LW program is expected to conclude by 2011, to be followed by full scale development decision. The actual weapon could be introduced into service incrementally, beginning in 2011.

‘Fire Shadow’ will be designed to meet the UK’s requirement for an affordable weapon with an operating range exceeding 100km, and terminal attack precision in the ‘sub-metric’ CEP range (Circular Error of Probability). To meet complex rules of engagement, the weapon will features Man In The Loop (MITL) operation, enabling a human operator to overrule the weapon’s guidance and divert the weapon’s flight path or abort the attack and return to loiter mode in conditions where friendly forces are at risk, prevailing conditions do not comply with rules of engagement, o, where an attack could cause excessive collateral damage.

The loitering weapon will be targeted by Intelligence, Surveillance, Target Acquisition and Reconnaissance (ISTAR) assets such as Watchkeeper and be compatible with other battlefield systems. The LM will be capable of loitering in the target area for around 10 hours and will be particularly effective in air-defense and ballistic missile suppression missions, and support operations requiring extended persistence, such as asymmetric counter-terror or operations in urban environments. Following launch, Fire Shadow will cruise to its loitering area the battle zone, where the weapon will be able to receive real-time target information from a range of sources in a potentially network or infocentric enabled environment. Such sources could include ISTAR aircraft or surveillance UAVs (Unmanned Air Vehicles) or even from an operator on the ground.

The goal set by the British MoD is to procure the Fire Shadow as a low-cost munition, at a unit cost comparable to that of a Guided MLRS round. Yet due to its extended persistence over the battlefield, Fire Shadow is expected to offer improved ‘yield’, having higher probability of engaging valuable targets over its extended mission. 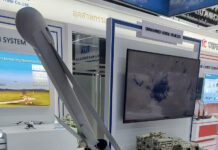