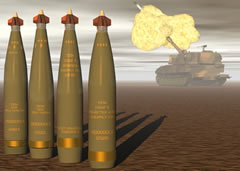 PGK will complement other precision munitions such as Excalibur and Saber, offering significant improvement in fire effectiveness at an acceptable cost. PGK will be employed in three separate increments, with 155 and 105mm ammunition. The PGK will be set by the Enhanced Portable Inductive Artillery Fuze Setter (EPIAFS). PGK will Enables commanders to suppress enemy elements quicker and more efficiently
Complements precision munitions.

In the past two months BAE systems conducted two series of tests, as part of a second part of an interim testing for the U.S. Army’s Precision Guidance Kit (PGK) Technical Development program. The recent firings tested the fully autonomous GPS guided flight using M549 Rocket Assisted Projectiles (RAP) fired at a range of about 20.5 kilometers; the guided rounds demonstrated the ability to acquire GPS within the desired time and the ability to maneuver within the required 50-meter Circular Error Probable (CEP). The Army plans to award the development contract to the winner of the competitive shoot-off. Increment 1 PGK (<50m CEP accuracy with 155 HE rounds) is expected to be fielded in Fiscal Year 2009. Increment 2 will improve accuracy to 30 meters.

Other competitors for this program are ATK, which teamed with Rockwell Collins and Draper Labs. ATK developed a guidance system embedded into the fuse assembly of conventional projectiles. The kit uses a fixed canard design, which does not require complex activation or deployment of actuation. ATK claims the new guidance system will be able to reduce the calculated error point (CEP) below 20 meters (x10 time’s advantage over unguided artillery).

BAE Systems announced April 12, 2007 the conclusion of20 successful firings of a 155mm GPS-guided artillery projectile. The company is leading one of two teams competing for the PGK program. The recent test demonstrated the capability of the GPS guided high explosive, rocket assisted round to hit targets at a range 20.5 km with 50 meter (CEP) accuracy, which is the threshold of PGK increment 1. BAE Systems and ATK will participate in the ‘shoot-off’ which will determine the final winner of the program.