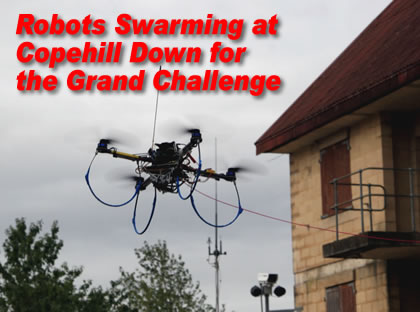 The final stage of the British Grand Challenge competition began Saturday 16 August 2008, on Salisbury Plain. During the three day contest, teams from across the UK science and technology industry will demonstrate how effectively unmanned vehicles can be used to locate hostile military threats. By Tuesday, seven teams competed for the final phase. At the end of the day, Team Stellar were announed as the winner.

In addition, Team Swarm was awarded the prize for the “most innovative idea” after designing a multiple autonomous quadrator (flat helicopter with four rotors) called Owls, capable of flying in swarms, allowing them to view the area from all angles using high resolution visual cameras. Also, Team Thales was awarded a prize for “best use of national talent” for their use of a mini helicopter fitted with daylight and thermal imaging technology alongside two custom built ground vehicles.

The final phase of the competition includes nine teams, challenged with a range of missions simulating asymmetric combat scenarios simulating sniper threats, vehicle mounted weapons, road side Improvised Explosive Charges (RSIED) and fighting urban combat with irregular forces. It asks competitors to create a largely autonomous system that can detect, identify, monitor and report the position of a wide range of threats that UK Armed Forces currently face when operating in an urban environment.

Technologies experimented through the Grand Challenge aim to demonstrate the value in having advance intelligence provided by unmanned systems. The teams will be put to the test over the next few days at Copehill Down, the military training village, on Salisbury Plain, where the vehicles will need to navigate around the village and detect and report a series of threats, including simulated IEDs within a one-hour period.

The teams competing in the final phase bring together expertise from 17 small and medium sized enterprises, seven universities and two schools. Another three schools have been involved through the Science, Technology, Engineering and Mathematics Network (STEMNET). Six of the teams have been funded by the MOD while other teams have entered with their own funding. The six teams funded by MoD include Stellar, Swarm Systems, MIRA, Tumbleweed, Silicon Valley and Barnard Microsystems. Investment criteria included innovation, technical quality, novelty, exploitation, diversity and value for money. The remaining five teams were self funded by defense industries or academia, including Cortex (QinetiQ), Thales, Locust, I-Spy, and Mindsheet. Another team from MBDA has also joined the program but is not part of the current competition.

Andy Wallace the Grand Challenge Project Leader from Defence Technology and Innovation Centre highlight the significant contribution gained by the challenge, for relatively small investment by the MoD. “For the modest investment we’ve put into this project and the fact we have 11 teams putting forward equipment, we have optimised the defence budget by searching for the technology in this way.” said Wallace, “We’ve already been testing the equipment and seen some very exciting technology already. It depends on how mature the actual technology is but we could award the winning team a contract for further development.”

The winning team was presented with the R J Mitchell Trophy, made from the metal recycled from a Spitfire, on Tuesday 19 August 2008. The Grand Challenge, developed from current operational challenges, was inspired by great innovators of the past like RJ Mitchell who designed the Spitfire. The UK Grand Challenge was launched in July 2007, in parallel to similar competitions in the USA and Germany. (Continued)