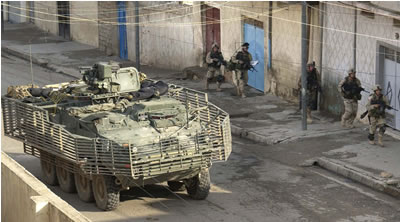 A basic lesson learnt by US and coalition troops engaged in counter-insurgency operations in Iraq, as well as the Israelis in their Low Intensity Conflict with the Palestinians, is that a fully integrated combat team is crucial in any urban warfighting environment. Across the spectrum of combat action in urban warfare, a mutually supporting combined arms (armor-infantry) tactical element can achieve success while keeping casualties, as well as collateral damage to a minimum.

Due to its nature, fighting in urban environments rapidly decentralizes and is extremely difficult to control even at the lowest tactical fighting level. At small-unit tactical levels, (squad and platoon) light infantry forces (not adequately armored) face serious disadvantages. While moving exposed in an urban environment, dismounted infantry troops may be subjected to intense hostile fire, sources of which are difficult to locate. Normal small unit weapons lack adequate firepower for subduing well protected enemy bunkers and, especially, carefully camouflaged positions in buildings. Decentralized tactical movements through built-up areas results in severe difficulties in maintaining control and mutual identification. In this type of situation, the danger of fratricide casualties also becomes acute. This inferiority can be compensated for by using armored vehicles like the ones available in mechanized infantry units, provided that the vehicles are adequately protected by add-on armor or other protective suites capable of withstanding Rocket Propelled Grenades (RPG) and heavy Improvised Explosive Devices (IED) attacks.

Even though armored, tanks and mechanized infantry units also face dangers in confined urban areas due to limited all-round observation and restrictions to maneuver capabilities. This places them at an especially severe disadvantage when operating alone. During urban encounters by US armored elements in Iraq, troops reported several effective tactics used by insurgents, including sniping and dropping grenades from rooftops or upper floor windows, in an attempt to attack vehicle crews and commanders through open hatches. Other tactics included simultaneous attacks on both flanks from alleys, allowing the insurgents to fire RPGs from close range at these relatively weak areas of the tank’s armor.

Tanks and other armored vehicles are not invincible, especially in urban terrain, where they are vulnerable to attacks from close range by man-portable anti-tank weapons such as RPGs. Since the urban scenario has no “frontline”, attacks can come not only from the front, where the tanks are heavily protected, but also from above, and from the flanks or the rear, aiming at the vehicle’s weak spots. Attacks by IEDs and mines can also come from below the surface.

Although urban warfare is not exactly the tanker’s dream, a significant number of future battles will inevitably take place in this environment. The value of tank support cannot be underestimated in this high-risk environment, in which a commander wishes to use all available combat elements in order to reduce casualties. Modifications to tanks for use in urban combat conditions will continue to make them indispensable partners in the future warfighting team.