Some of the concepts evaluated during the UK Grand Challenge competition focused on different combination of aerial and ground autonmous systems operated in synchronization and mutual support. Others focused on ground swarms, constellations and formations of ground vehicles or unmanned hoevring aerial vehicles.

Patrolling in urban environments against an evolving and rapidly changing threat is an ongoing element of current operations for UK Armed Forces.
Recent developments in unmanned systems have seen a revolution in the way intelligence is collected and relayed to commanders. However, current in-service systems focus on long-range, high-flying operations providing a strategic surveillance and reconnaissance capability. 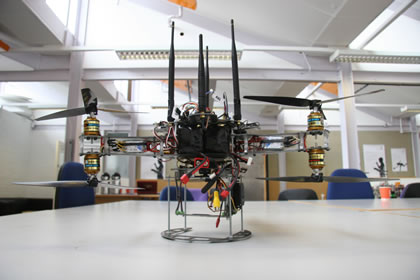 Recent advances in the technology, safety and flexibility of unmanned systems mean their great potential to assist short-range, reactive operations, such as urban patrols can be realistically considered.

Such systems need to be operable by small numbers of troops at very short notice, with the minimal amount of user input. This requires the system to have a high degree of autonomy and to be effective it must have the capability to reliably identify threats to the troops and relay them quickly to the commander.

Copehill Down Village is the largest fighting in built-up areas (FIBUA) training facility in Europe. The village is used for pre-deployment training for UK and Allied armed forces, providing troops with essential skills for urban operations. Built in 1986, Copehill Down resembles a small northern European town, complete with a church, school, hotel and bar. The site is approximately 350m by 450m. The village contains around 80 buildings and includes a more recently build section based on an Iraqi village.

Some of the concepts evaluated during the UK Grand Challenge competition focused on different combination of aerial and ground autonmous systems operated in synchronization and mutual support. Others focused on ground swarms, constellations and formations of ground vehicles or unmanned hoevring aerial vehicles.

The London based Barnard Microsystems team employed two types of remotely controlled model helicopters acting as aerial scouts. A different light weight ‘tricopter’, capable of hovering and perching whilst surveying the area of interest with imaging sensors was developed by Students from Middlesex University as part of the I-Spy team (photo). A different helicopter platform was employed by team members from Thales and the universities of Reading, Cranfield, Exeter and Loughborough and three schools from the Science, Technology, Engineering and Mathematics Network (STEMNET). They have used commercially available helicopters and two custom built ground vehicles (photo) equipped with audio, visual and thermal imaging sensors and laser range finder to detect potential threats.

Swarm Systems used a ‘swarm’ of ‘Owls’, four-rotor (quadrotor) micro aerial vehicles (MAV) each weighing less than 1 kg.The Swarm is tasked to rapidly reconnoitre an area. A swarm approach, when compared to an individual approach, brings the benefits of emergent behaviour, in particular robustness to unforeseen events. As Professor Owen Holland at the University of Essex explains: “Swarming has many proven advantages. Most importantly, it can survive unexpected events. If one vehicle is suddenly lost, then the swarm reconfigures itself to complete the task.” The team’s concept is simple. It uses a swarm of eight quadrotors called ‘Owls’. Their operator uses 3D planning software to swiftly plan and rehearse routes for the Owls over Copehill Down village. The Owls then fly those routes, taking around one thousand high-resolution images. On return, these images are processed by a cluster of ten powerful multi-processor PCs, which analyze each image using the University of Surrey’s threat recognition software. Within minutes, the operator can produce a map of Copehill Down showing the location and type of all recognized threats. Swarm team members drawn from Swarm Systems Ltd, University of Essex, University of Surrey, Orrcam Ltd, Ardware Ltd and Scarzon Ltd.

Members of Team Tumbleweed included the University of Manchester, AV-I Ltd, BAE Systems and MBDA has designed a small six-rotor lightweight UAV, (model is shown on the left) with rotors held in a circular frame (making a spherical ball) and fitted with visual and infra-red sensors. The vehicle is fitted with a stabilized electro-optical sensor system.

MIRA, ERA Technologies, BAE Systems, GFS Projects, University of Warwick and pupils from Royal Grammar School, Guildford formed the Mira team, which presented a combination of a “flying saucer” like UAV and a ground carrier/launcher platform (see photo above) which also operates as an autonomous ground sensor, both equipped with infra-red cameras and laser scanners. Mira also offered a land based platform carrying mainly optical sensors with a tethered aerial camera for situational awareness. A group of young engineers from the Cortex team, sponsored by QinetiQ designed a two-rotor, highly maneuverable and lightweight winged unmanned air vehicle, (picture) capable of vertical take-off, landing and hovering. The system qualified for the final phase but failed to compete due to technical problems. Another system that failed in the last phase was a pocket-sized, lightweight and easily transportable foam UAVs developed by Team Locust, (see picture above) formed by members of Advanced New Technologies (ANT) Scientific Limited, Portsmouth University and Satmap Systems.