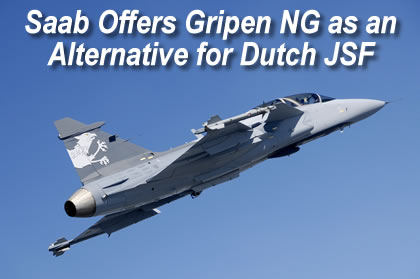 Hague, August 26, 2008: Saab is offering the Gripen NG (Next Generation) multi-role fighter to the Netherlands, in response to the Dutch request for proposals for a successor to the Royal Netherlands Air Force F-16. Saab is offering 85 Gripen NGs, and a comprehensive logistical support package including spares, training and simulators. The company detailed its offer at a news conference held in the Hague, today.

According to Saab Gripen communications director Owe Wagermark, the price Saab is asking for the package is well within the €5.6 billion budget earmarked for the procurement of 85 F-35As. In fact, based on other proposals recently submitted by Saab, the Gripens are expected to cost less.

Saab also offers an industrial cooperation package worth at least 100% of the contract value. Hague was expecting to evaluate several alternatives for the program, but will limit its consideration to the Gripen NG and F-16 Block 60 from Lockheed Martin. Both aircraft are also competing for a large tender current undergoing in India. Hague will evaluate these proposals and capabilities against the F-35A Lightning II, previously considered to be the future aircraft of choice for the RNLAF. To better compare with the JSF, Saab highlights the more advanced capabilities of its new-generation fighter, as reflected in the Gripen Demo technology demonstrator, which offers unique super-cruise performance, sofar provided only wit te F-22 Raptor, extended range capability, flexible weapons carriage and advanced AESA radar.

The recent evaluation was initiated as part of re-examination of the JSF procurement business case mandated by the Dutch Parliament. The decision is expected to be made this year (2008) before committing to the procurement of two aircraft already decided by the Defense Ministry.

The Netherlands has joined the Joint Strike Fighter development and demonstration program as ‘Level 2’ partner. This position was reiterated this year the Dutch Ministry of Defense announced its decision to acquire two F-35As in 2009 as part of its participation in the multinational JSF test force, conducting the Initial Operational Test and Evaluation (IOT&E) phase. These aircraft will be delivered in 2011 and 2012, and joining the test and evaluation phase in 2011-2013, supporting operational testing and evaluation for all participating air forces. The Royal Netherlands Air Force plans to buy 85 conventional take-off and landing F-35s to replace its Lockheed F-16s, with the nation holding Level 2 status on the program’s system development and demonstration phase.

Marketing of the Gripen is currently in full momentum. This year Saab submitted four proposals for the sale of Gripens of various types (NG and C/Ds) in India, Norway, Denmark and Switzerland. Earlier this year the company closed a deal in Thailand, for the sale of 12 fighters and two AEW aircraft.