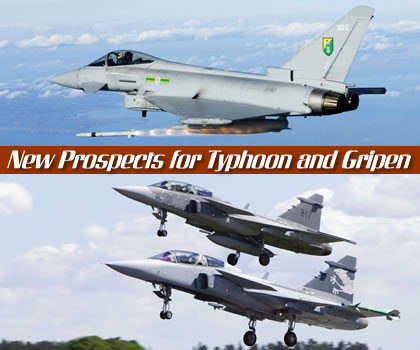 Despite the significant differences between the two fighters, sales prospects for additional sales for Typhoon and Gripen are similar. The most lucrative opportunity is the tender for 126 fighters in India. Six competitors are eying the Indian program, including Lockheed Martin wit the F-16In, the F/A-18E/F from Boeing, Saab with the Gripen NG, the Rafale from Dassault. Eurofighter offers the Typhoon and MiG proposes the MiG-35. Other near term prospects include Switzerland, where the Swiss Air Force requirement for 30 fighters replacing F-5E/F is currently in competition. Brazil and Romania are both interested in renewing their fighter fleets considering renewing their fighter fleets with requirements for at least 48 fighters. Japan is eying Typhoon as a successor to the F-15J, if its plans to acquire the F-22 fail.

While Saab positions its new Gripen Demo as a potential competitor for next generation fighters such as F35, the company is offering the C, D and NG Gripen models as replacement for early model F-16s. The company is currently producing 31 Gripen C/D aircraft under the Swedish contract. 14 aircraft (12 single and two twin-seaters) were delivered earlier this year to Hungary. The marketing campaign targets potential clients in Europe, Latin America and the Far East. Saab recently struck its first marketing success in Thailand, wit the sale of six Gripens (four two-seaters and two single-seaters) and a single Erieye airborne early warning and control (AEW&C) aircraft. In October 2007, the government of Thailand approved the procurement of Gripen fighters to replace the Royal Thai Air Force’s ageing F-5 fleet, and in February 2008 Thailand and Sweden signed contracts for the supply of the initial 6 aircraft Gripen aircraft for the Royal Thai Air Force (RTAF); six additional fighters and another Erieye aircraft are funded under the $1.1 billion program. 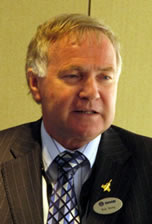 According to Bob Kemp, Marketing Director for Gripen International, four prospects for the Gripen are considered ‘near-term; (within 24 months) including Croatia, Romania, India and Switzerland. Together, these tenders represent a market for more than 216 aircraft. For the longer term (2012-2013) more opportunities are rising in the Balkans, Eastern Europe and Scandinavia – including Greece, Bulgaria, Slovakia, Brazil, Norway, Denmark and, possibly the Netherlands. The last three are currently members of the Joint Strike Fighter team and for Saab, winning a competition against the future fighter could represent a big success that could have ripple effect on its entire future prospects.

Unlike past designs which focused on air superiority air/air capabilities and provided air/ground as a secondary priority, current fighters are considered ‘multirole’ in nature, and assume air/ground capabilities as soon as possible. Both the French Rafale and Eurofighter Typhoon completed air-ground capability tests, with Rafale already participating in combat operations in Afghanistan earlier in 2008. RAF Typhoons were declared ‘combat ready’ for air/ground missions on July 1st 2008, following an intensive exercise in the USA. Typhoon has also passed Type Acceptance Block 5 for air-to-air and air-to-ground capability, signature for the First Phase Enhancements contract, signature for the contracts of the Salam Project and submitting the proposals for the third Tranche of Eurofighter Typhoon on schedule.