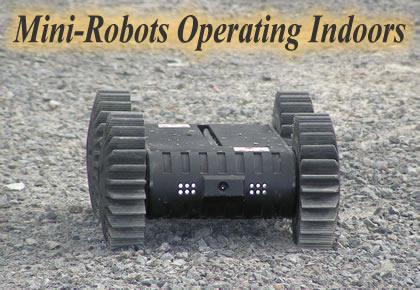 Miniature robots are designed for indoor surveillance and recce, assuming the dangerous mission of patrolling an indoor space suspected to be occupied by terrorists. Among these mini robots are the Swiss made Micro SpyRobot from Macroswiss, the Israeli EyeDrive from ODF and recently introduced Dragon Runner from QinetiQ North America. 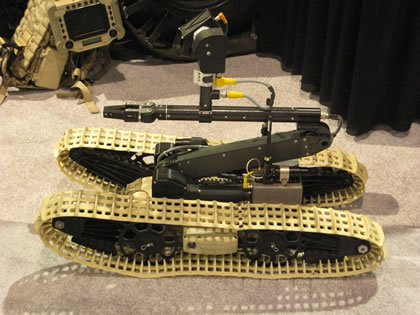 Wheeled robots are fast and agile, but lack the ability to negotiate vertical obstacles. In contrast, tracked robots could be slower but more resilient. Both Dragon Runner and EyeDrive can mount tracks, enabling the platform to negotiate staircases and other obstacles. The Viper, from Elbit utilizes an innovative transforming wheel/track mechanism that adapts to the surface characteristics.

Several companies are offering tracked robots t best handle multi-level complexes. such are the SUGV-300, developed by iRobot for the US Army Future Combat Systems program. Elbit Systems has also developed a tracked robot known as the the Versatile, Intelligent, Portable Robot (VIPeR), which can climb or descend stairs using patented wheeled/tracked propulsion. The Viper can mount cameras, deployable sensors and even lethal weapons.

Another approach for obstacle negotiation is the ‘Urban Ops Hopper’, a semi-autonomous hybrid hopping/articulated wheeled robotic platform that could adapt to the urban environment in real-time, delivering small payloads to any point of the urban jungle while remaining lightweight and small. The hopping robot, under development for DARPA will be able to overcome obstacles many times its own size. According to DARPA, hopping mobility can be shown to be much more efficient than hovering for obstacles at heights less than or equal to a few meters. (read more on the hopping EyeDrive) 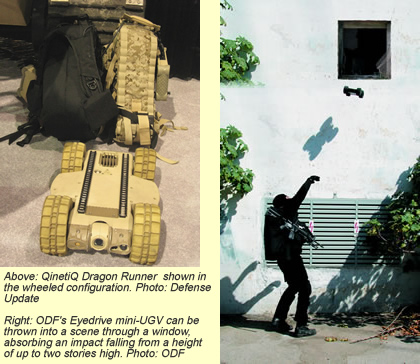